Near Amarillo, Texas, is the Cadillac Ranch, a public art display of half-buried Caddies. It inspired Springsteen. Here's our review.

The Cadillac Ranch (it has its own Facebook page!) was built in 1974 and created by Stanley Marsh 3 (not III, because he found the Roman numerals pretentious). Marsh was an heir to his family’s oil and gas fortune. He was known as a quirky and successful banker and TV executive. But Marsh was best known for his art, most notably “Cadillac Ranch,” a row of 10 graffiti-splattered cars seemingly standing on their noses along Interstate 40 west of Amarillo.

Marsh collaborated with The Ant Farm, a San Francisco art collective and funded the placement of ten graffiti-covered Cadillacs half-buried in a field. The cars were positioned nose-down to face west “at the same angle as the Cheops’ pyramids [in Egypt].” In 1997, the cars were moved two miles farther away from the expanding city.

The Cadillac Ranch is open to the public at all hours. Graffiti on the cars is encouraged and the cars undergo ever-changing layers of paint. In 2005, the cars were given an all-pink makeover in tribute to breast cancer victims. Later, they were painted black and yellow to honor the passing of one of Marsh’s longtime friends. The popularity of Cadillac Ranch inspired Carhenge in Alliance, Nebraska. 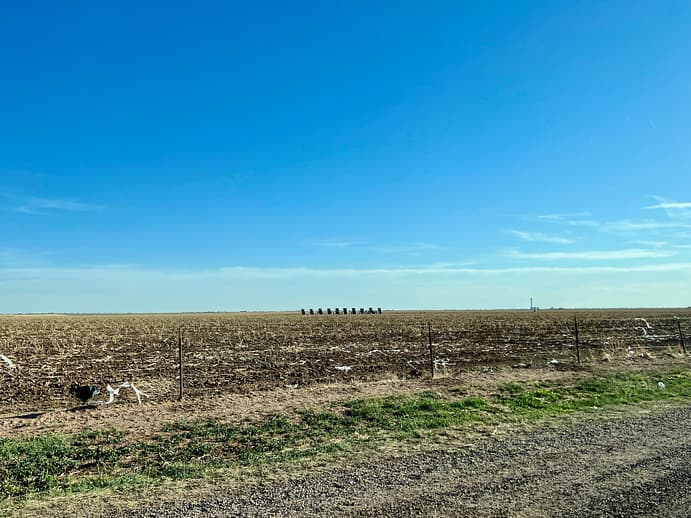 Madeline and I drove right past the ranch and missed it. From a distance it looks like some machinery in a corn field. To get to the attraction, you need to be on the I-40 frontage road. It is just west of the Amarillo city line. From I-40, take exit 60. Follow the frontage road on the south side of I-40. For some of us, this might be sentimental journey since this frontage road is the old Route 66. Follow the frontage road east for one mile. Cadillac Ranch will be on the right (south) side; you can park your car on the shoulder and enter the pasture through an unlocked gate. Visitors and their dogs are encouraged.

When we visited, we saw many people with spray paint. We were there to just look and did not pretend to add artistic value to the cars. There are ten Cadillacs, starting with a 1949 Club Sedan and ending with a 1963 Sedan de Ville. They were found in junk yards and either driven or hauled to Marsh’s fields and placed nose-down, facing west in a straight line. 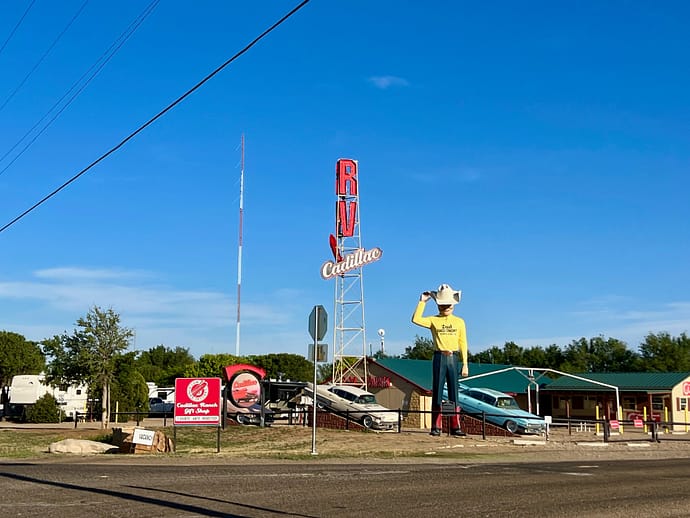 Nearby there is the Cadillac Ranch RV Park and Gift Shop. We didn’t stop there but it is an interesting photo opportunity.

A large Texan stands in the RV park dressed in a yellow shirt. He’s known as the Second Amendment Cowboy, but he’s also known as the Muffler Man. The cowboy stands 22 feet tall, with his head tilted slightly forward. Wearing a beige Stetson hat, he’s waving with his right hand while his left hand is at his side. His shirt is yellow, with black lettering on both sides, identifying himself as the 2nd Amendment Cowboy. His slacks are dark blue with white stitching on the back pockets, and they're held up with a black belt and silver buckle with a longhorn steer on it. He's wearing silver spurs (which do not spin) on his black boots

He's certainly quirky and interesting. He reminded me of the many Paul Bunyan statues I’ve seen in Minnesota. Bob Prewitt started making these giant figures when he created a mold for a Paul Bunyan statue around 1960. The mold was reused and refashioned to support a guy who held a muffler that promoted auto repair shops. The mold had hands that cupped upward and downward so Paul Bunyan could hold his ax and the Muffler Man could hold his muffler. This Texan has one hand near his Stetson and the other hanging down. The hand molds were broken and refashioned to allow this repositioning.

There are three pastel Cadillacs next to the Muffler Man. Unlike Cadillac Ranch, these are not spray painted or buried. They are on a nose-down angle and behind the wheel of each car is one of the following: Elvis Presley, Willie Nelson and John Wayne.

Willie is a Texas icon and John Wayne was in so many cowboy movies, I thought he’s probably an honorary Texas citizen. Well, he is. “When you think of Texas,” Lieutenant Governor Dan Patrick proclaimed, “you think of John Wayne.”

So, what about Elvis? In my post about the Buddy Holly Museum, I talked about how Buddy idolized Elvis. When he saw him in concert, Buddy knew he had to try to be a great musician like his idol.

Buddy Holly and Elvis Presley shared the same bill on February 13, 1955, in Lubbock. A young Buddy Holly opened for Elvis, who kindly lent Buddy his Martin guitar for the show. In the side-by-side photo taken in 1955, you can see Elvis’s guitar being played by Buddy. So, I’m glad an Elvis mannequin made it to Amarillo.

As you leave Cadillac Ranch, turn on Bruce Springsteen’s version on your radio. In the first few verses of the song, Bruce sings about everyone going to the Cadillac Ranch. He references his family and some famous people connected to cars and driving like James Dean, Junior Johnson and the Bandit, Burt Reynolds. After their final ride they all end up at the Cadillac Ranch. No matter where you’re driving or how fast you’re going, you all end up in the same place in the end.

In the song Bruce knows he’ll wind up at the Cadillac Ranch, but he’s in no hurry to get there. At least if you visit the real Cadillac Ranch, you can leave whenever you want and just keep moseying down Route 66. Enjoy the ride!