This was what we jokingly called the Shackleton Experience. Mikkelsen Harbor is a small bay between Skottsberg and Borge Points on the south side of Trinity Island in the Palmer Archipelago. Today was snowy, cold (two degrees) and windy (25 MPH). We waited a bit because the waves were too strong for the Zodiacs. When the wind speed dropped to under 10 MPH, we took off in the Zodiacs. The snow continued, but it was safe. 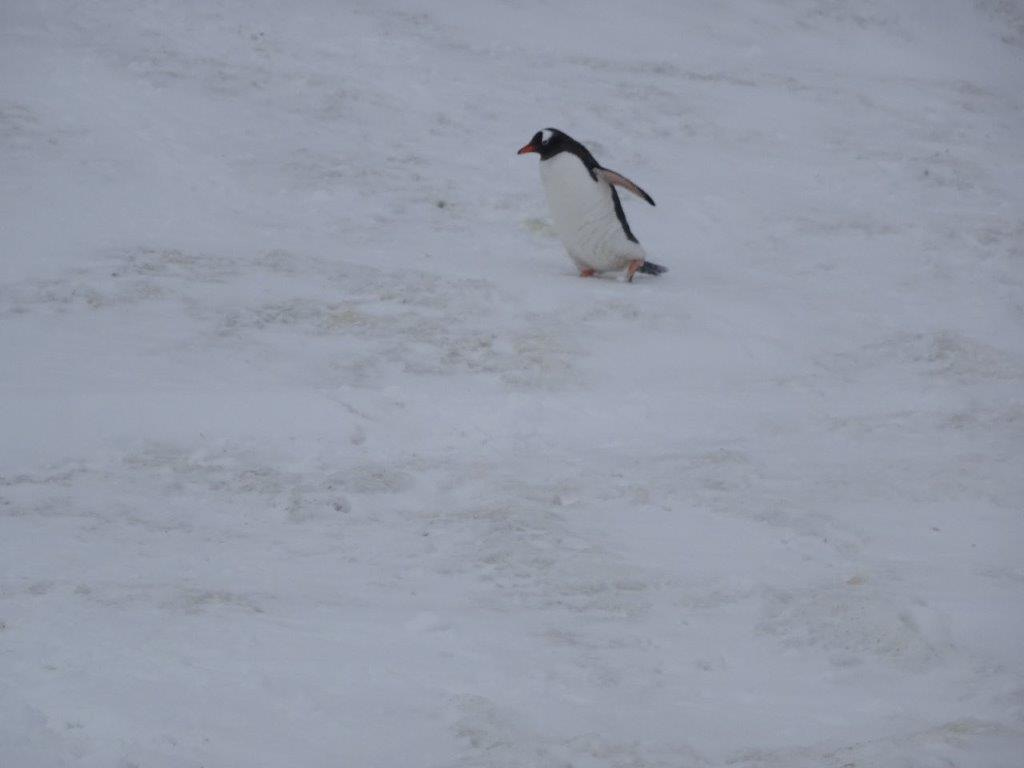 We landed and saw plenty of gentoo penguins. One happy little fellow greeted us. 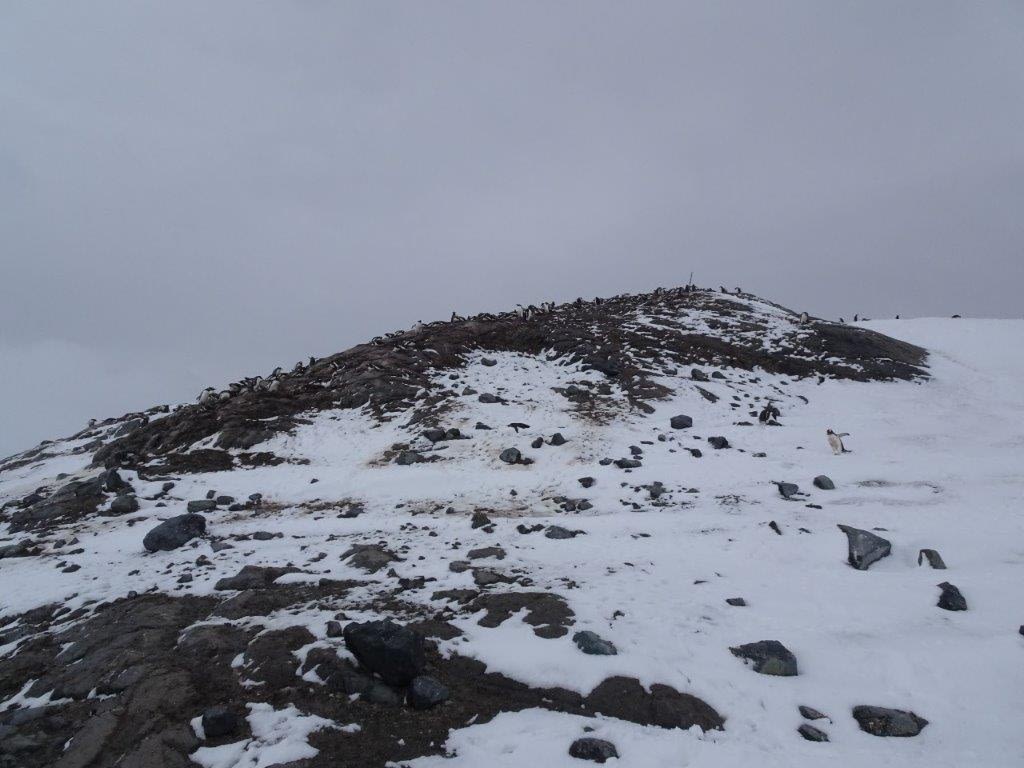 His family was a higher on the slope in the rookery. To see them we had to climb up through the snow path.

Taking a well deserved rest after a night of fishing

Before that, we saw a relaxing elephant seal.

It was cold, it was windy, it was Antarctic

It was bitterly cold, so we didn’t stick around long. We climbed the path to see the gentoo penguin rookery. We were both cold, and I barely got a photo of her standing next to one of our guidance flags in the blustery Antarctic wind.

This was the first time on our trip that it snowed this hard. And with the wind gusting so much, we had a wet Zodiac ride with the waves splashing into the boat.

Visiting Cierva Cove, on the coast of the Antarctica Peninsula, was a Zodiac tour with lots of marine life to see. Even while we waited for the expedition, we watched whales surfacing and blowing air out and sucking more air in.

Ice flows surrounded the Silver Cloud. Our Zodiac bobbed and weaved around them as we sped off in search of icebergs, seals, penguins and whales.

Cierva Cove was peaceful with no wind. Our expert Zuber driver communicated with the other nine boats while they all looked for whales. We spotted a couple, but I couldn’t get a photo. This time, Madeline caught the action.

One is the loneliest number

We spotted a lone penguin atop a small ice flow. Not sure what he was doing. Maybe he was worried about leopard seals?

We spotted our first leopard seal. He didn’t seem to care about us. He slept or pretended to sleep.

This was a big one

The icebergs were magnificent. Wind and water sculptured some of the ice, while others were more like gigantic floating blocks.

Icebergs come from glaciers so what are glaciers?

Glaciers are made from fallen snow that over many years compresses into large ice masses. And glaciers move. Some are small, similar in size to a football field. Others can be more than one hundred miles long.

Glaciers occupy 10 percent of the world's total land area, with most located in polar regions like Antarctica, Greenland and the Canadian Arctic. Glaciers started forming during the last ice age when ice covered 32 percent of the land and 30 percent of the oceans.

Glaciers can be on land and creep to water. When the edge of a glacier creeps into the sea, some pieces break off or calve creating an iceberg. Between 10,000 and 15,000 icebergs calve each year. Some ice is more than 15,000 years old.

The largest icebergs roam around Antarctica. Ninety-three percent of the world’s icebergs are here.

We saw some beautiful icebergs. Some had colored circles. Our pilot said the circles may have been submerged, and then lifted above the water line.

Sea sculptures of all kinds

We thought another looked like two giant airplane hangars.

But we didn't see a plane

I took a closeup shot to see if they were carved in a hemispherical shape.

We didn’t see whales. But this isn’t a Sea World expedition. The whales do what they want. Seeing a couple of leopard seals and lots of lively penguins was great. And floating sculptures roaming the sea constantly changed the view.

Another group of penguins on an iceberg showed us they were having fun.

And a leopard seal waved goodbye with his fin.

Back aboard the Silver Cloud, we got ready for dinner. We ate dinner outside at The Grill on Deck 8 near the heated swimming pool. Even though the air temperature was zero degrees, the staff placed heaters in various places to take the chill away. And they gave guests wool blankets.

The chef grills your main course on a lava rock. We each got a lava rock and we picked what we wanted. They offered meat, chicken, pork and seafood. They also can grill vegetables. The lava rock is heated to between 540 and 660 degrees.

The staff gives you guidelines about cooking times, and we followed them. Since we each ordered steaks, we watched the color of the beef change before our eyes.

Remember that it was zero degrees out? I ordered a baked potato with my steak and they went cold within minutes. The béarnaise sauce served on the side turned into something like margarine. But everything tasted terrific! Eating in the antarctic cold is part of the experience. The wine stayed cold. No need for extra ice buckets!

You rarely need to dress this warmly for dinner. I came out with just a jacket but quickly went back to the suite for my hat and another layer. Silversea provides those red heavy-duty parkas you see us in. Next time, I’ll wear that and my glove liners. It was an experience we will never forget!

Searching for Shackleton in the Undiscovered Continent of Antarctica

​Read More
Searching for Shackleton in the Undiscovered Continent of Antarctica

Packing for Cruising Antarctica on Silversea