Here is a little historical information for Chicago, especially its old theatres. I’ve also added some personal history stories of Madeline and me growing up there.

And check out my history of Illinois and Chicago for some more fun facts and insight.

We hope this helps inform your next Chicago trip! 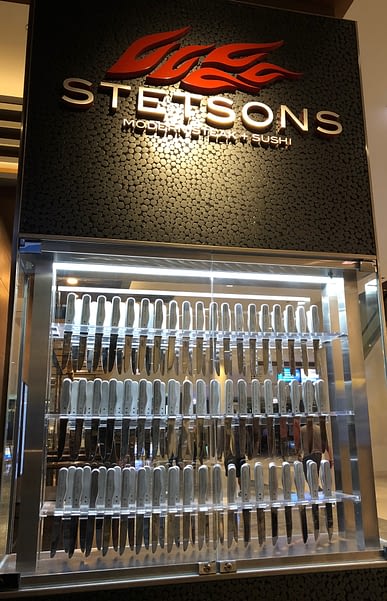 We went to Stetsons Modern Steak + Sushi for dinner during a labor strike. The restaurant offered a limited menu and days of availability. However, when we were here, we found the food quality to be excellent and the staff were terrific. 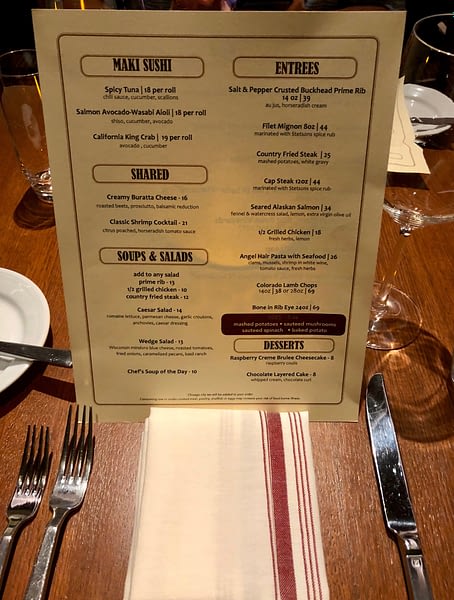 We would like to go back and try more menu options, but everything we had was excellent. Our compliments go to Pete, who served as our waiter, though his real day job was the general manager of the restaurant. He seemed to take every order in the place. Although he must have been tired, his attitude never flagged. 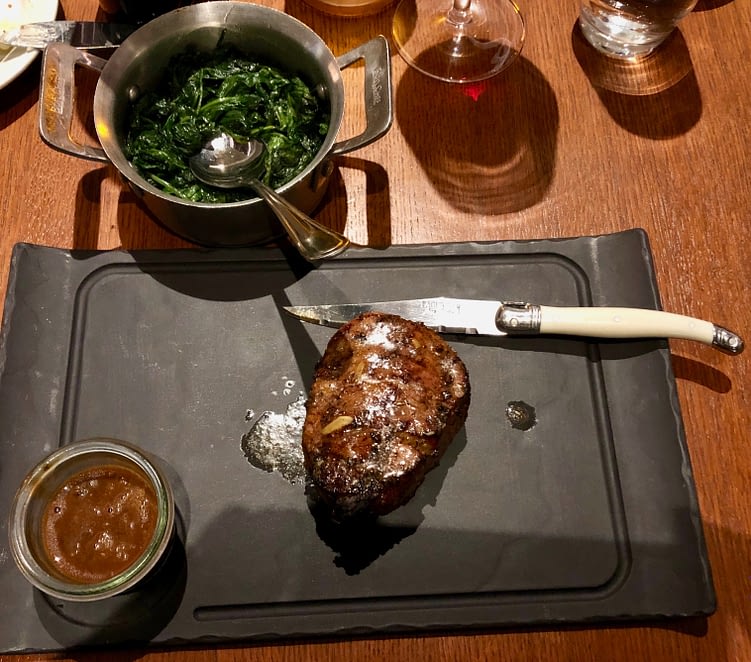 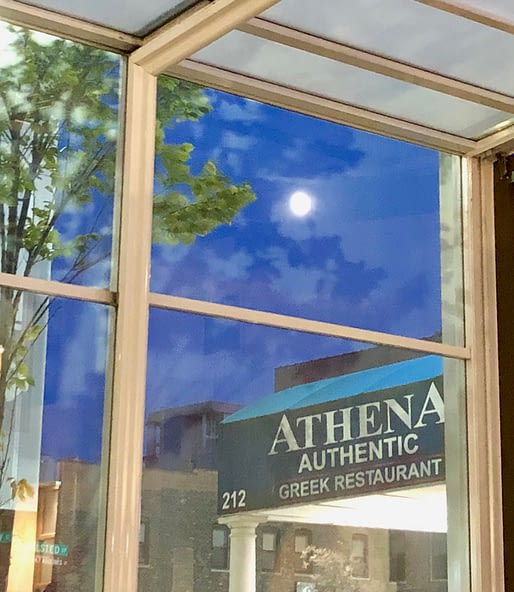 Our usual go-to restaurant in Greek Town was always The Parthenon, which sadly has closed. We learned all our Greek phrases at The Parthenon and enjoyed its wide range of Greek food. Instead, we tried someplace new, the Athena Greek Restaurant. 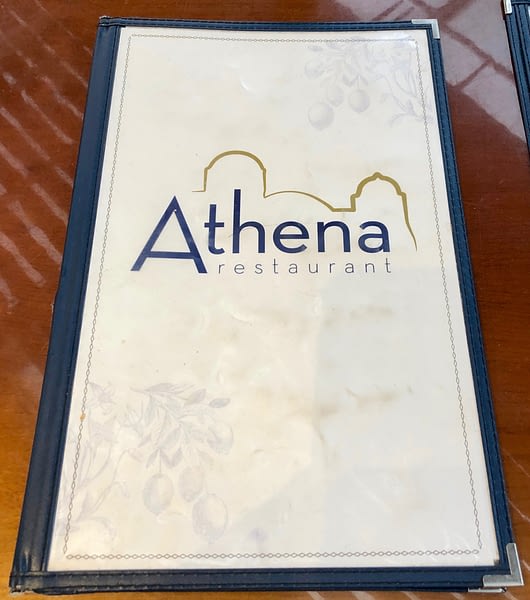 It was a very good meal. One thing we noticed right away: they couldn’t flame the saganaki because of a fire ordinance. What a disappointment! In the old Parthenon, all the diners would shout Opa! when the waiter lit the brandy in the dish making the flames shoot up. The Parthenon claimed that they invented the dish and the phrase Opa, but nobody really knows.

The Athena didn’t have the same ambiance as The Parthenon; the vibe just wasn’t there. The food was good. However, when we asked for the house wine Roditis, the waiter just smiled and said we should try this wine labeled Roditis. It was not the same style as we had come to love at the Parthenon. 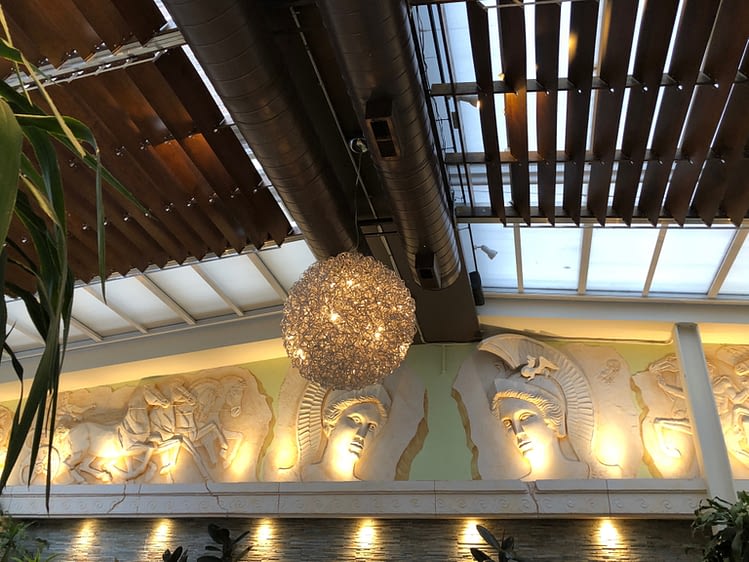 The Athena is a good Greek restaurant, but we couldn’t recapture the memory of The Parthenon.

Petterino’s is a Lettuce Entertain You restaurant, so take advantage of the loyalty program. We went for that reason and because it’s a fabulous restaurant. Chicago is famous for its diversity of food, and there is plenty of competition in the city for terrific restaurants.

Popular with the Theater Crowd

This is one of those restaurants. Petterino’s probably is more famous for its proximity to the theater district. The theater crowd loves Petterino’s, but we were ignorant of this. We went for a birthday dinner a few years ago and went back because we remembered how good the food was. It was somewhat difficult to secure a reservation, but we asked for a quiet table. It was laughable since the place overflowed with customers at 6:30 on a Sunday night.

We had no idea why the place was so jammed but quickly learned why as the place quickly emptied. Everyone was leaving for the theater. By 7:15, we practically had the place to ourselves. Finally, the quiet table we asked for! We just had to wait a few minutes.

They have a prix fixe menu—three courses—with very good dishes at a reasonably price. All are full portions and prepared in reasonable time.

The meal was excellent, as expected. We were lucky enough to have Tom as our server, and he was very knowledgeable about the restaurant, the menu and the history. He was patient with us even though he had a gazillion tables to service. We told him we were in no hurry so that helped. After 7:00, he had fewer tables, and we had virtually all his attention.

He was a terrific server, and the menu was definitely as memorable as before. We both had the filet mignon trio and started with a Caesar salad. Madeline and I diverged on dessert, but only because Madeline would greatly prefer their Key Lime Pie over anything chocolate. We were both very happy with dessert and, of course, the two main dishes.

If you are a Lettuce Entertain You member, go for the loyalty. Even if you are not, go for the service and great expertise in the kitchen. 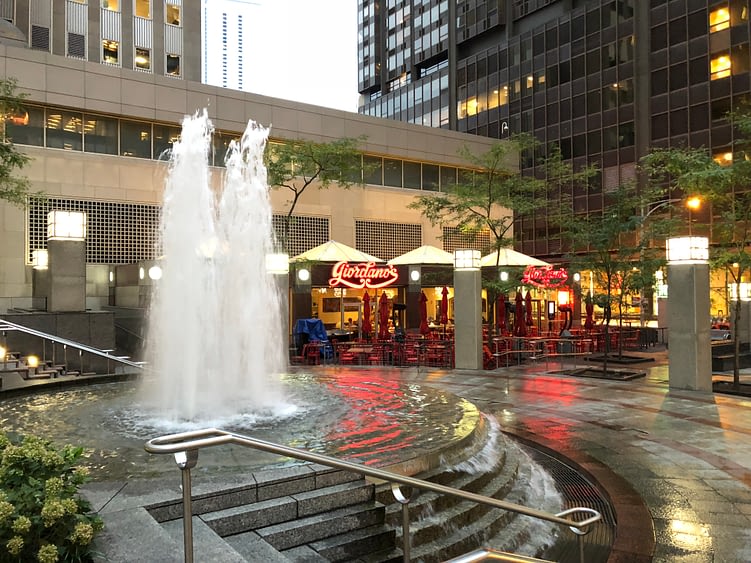 Pizza was widely available in Chicago since the 1800s, when many Italian immigrants settled in the area and cooked delicious pasta and pizza meals. The notion of deep-dish pizza in Chicago began in 1943 with the opening of Pizzeria Uno. Deep dish pizza, like its name, is in a deep dish with plenty of toppings, cheese and a larger crust than the classic Neapolitan versions. 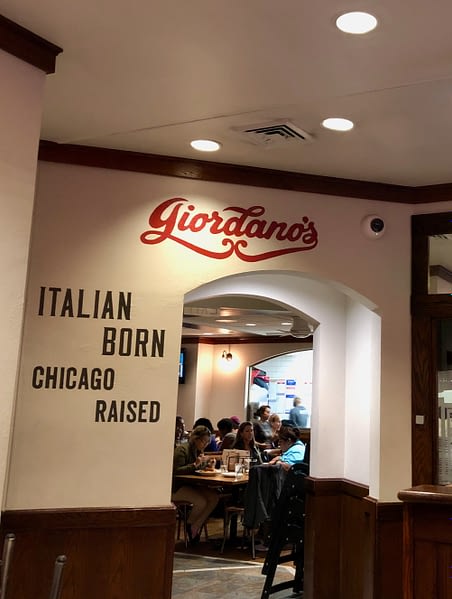 The popularity of deep-dish pizza increased year after year, and many pizza houses now offer deep dish pizza. In the 1970s, two Chicago pizza restaurants began offering a stuffed pizza style which was similar to deep dish. These were Nancy’s Pizza and Giordano’s started offering stuffed pizza. These types of pizza are usually deeper than deep-dish pizzas and have a lot more cheese and dough. 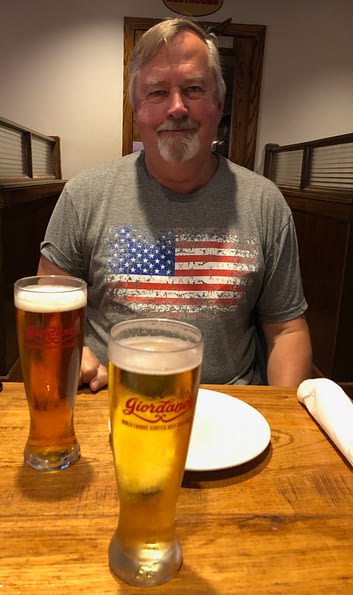 There are plenty of deep-dish places in Chicago, and we’ve been to quite a few. Lou Malnati’s Pizzeria is very popular, as is Pizano’s, Pizzeria Due (number two after Uno’s) and Gino’s East. Giordano’s has been around since 1974 and regularly earns the best pizza title in Chicago. It’s hard to go wrong with Giordano’s. 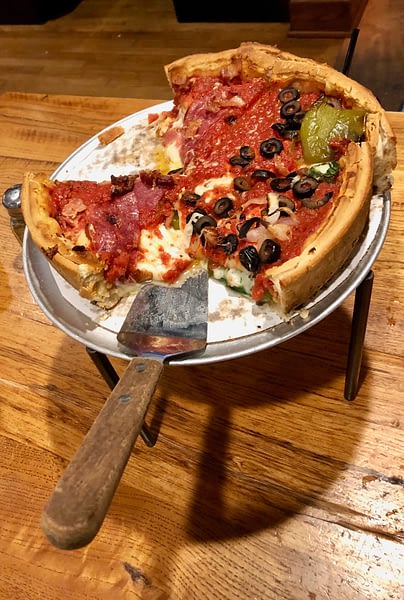 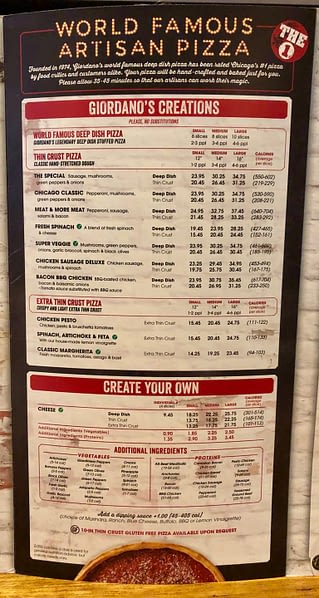 This is a great pizza place, and you will find friendly service. We are very familiar with Chicago deep dish pizzas and were accustomed to waiting for our pizza after ordering since they take about 40 minutes to bake. It’s definitely worth the wait.

The Tavern at the Park 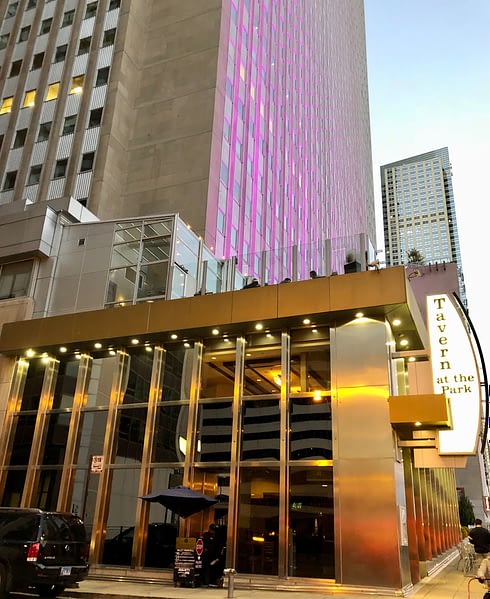 Regrettably the restaurant and its sister establishment are closed as of the end of March, 2019. We will be following the restaurant’s executive, Peter de Castro, to see what’s next. And we’re interested to see what happens to the space in Millennium Park previously occupied by the two restaurants. 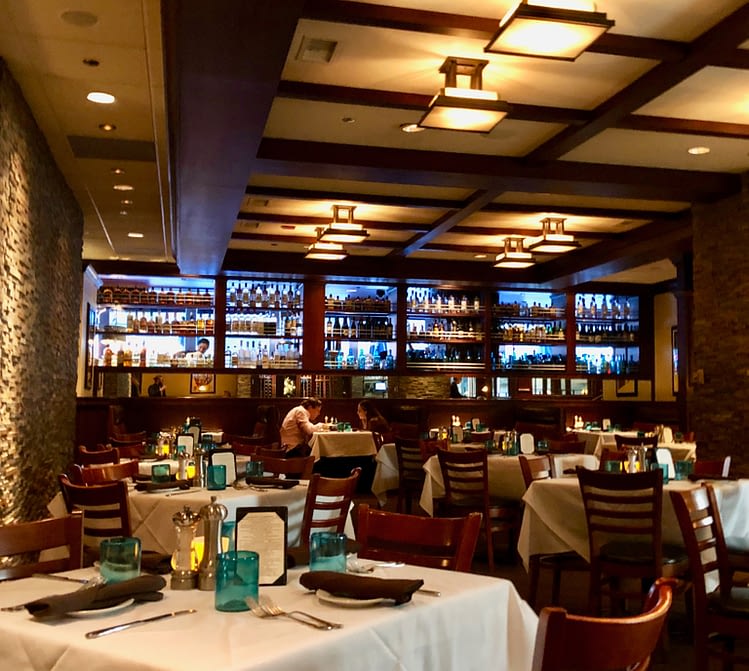 Tavern at the Park is across from Millennium Park, so perhaps that’s where its name came from. It’s in One Prudential Plaza, which was the tallest building in the city when it was built in 1955. The Tavern at the Park wasn’t around at the opening. The interior design is very clean and reminiscent of Frank Lloyd Wright. 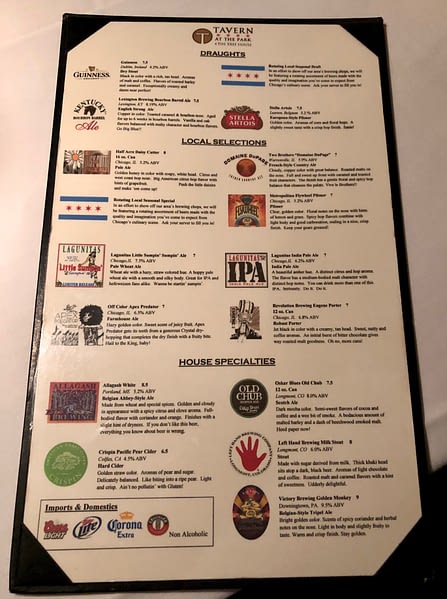 Tavern staff promptly seated us. We were lucky to get Dakoda as our waiter. He was very knowledgeable about the menu and steered us in the right direction. The steaks are aged and cooked to perfection, so we each ordered a different version. I had steak frites, and it was the best version I’ve ever had. The steak was not a hanger steak but a much thicker variety and perfectly cooked to medium rare. Madeline was a bit worried about the filet mignon sandwich with a bourbon aioli sauce, but she pronounced it excellent and perfectly cooked. 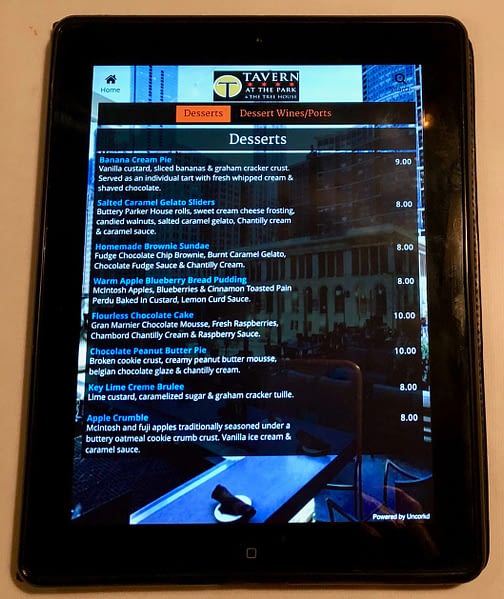 We were uncertain about dessert, but Dakoda brought out an iPad that showed the various choices with pictures. Madeline asked about the peanut butter cheesecake dessert, and he said it was one of his favorites. We split it and it was plenty to share. 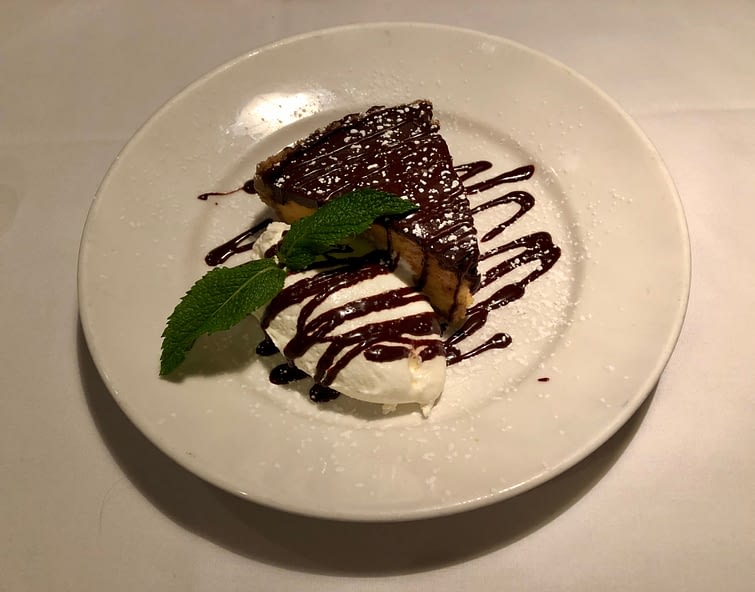 This is a great restaurant and offers less expensive burgers and appetizers, if you don’t want to go for steak. We would recommend anything related to beef since they are excellent in the kitchen and know what they are doing.

Service is great, and Dakoda took the time to explain everything to us. The Tavern also has a second-floor restaurant. It appears to do a good business, too.

We will would have loved to go back to this excellent restaurant.