Dublin, Texas, is a little town with a big history. Enjoy that history at the Dublin Historical Museum. Here's our review.

Madeline and I have been to Dublin many times over our lifetimes. Most of our families are buried at the local cemetery. So we’ve gone to our share of funerals. We’ve also visited the Dr. Pepper bottling plant, which was the only one in Texas that still made the drink with cane sugar. Unfortunately, that plant is now closed. But the Dublin Bottling Works still keeps the soda dream alive in Dublin. We highly recommend it.

But the Dublin Historical Museum is open and a great visit to learn interesting Texas history with a local flavor. We never knew about it, even after all our visits there over the years. It’s a hidden gem!

We met the docent, Ben Pate, when he graciously opened the museum to us after our tour of the Ben Hogan Museum, which was a few steps away. 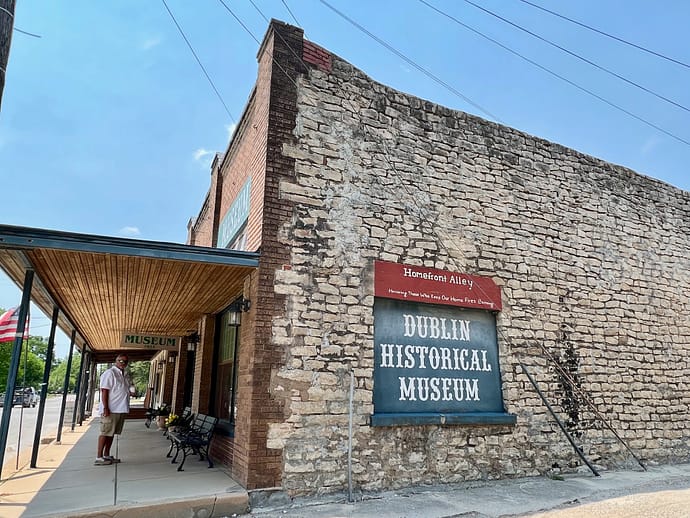 Dublin was established in 1854. The name might have come from its Irish counterpart, but the founder of the city was Scottish. Ben Pate told us that the name might have come from the melding of the term double-in, which was a warning cry that settlers used during conflicts, many of which were with the local Comanche Indians. To double-in was to a call to action for anyone with a firearm to defend the people and the land from attack.

From a Comanche perspective, the white people building houses and raising crops and cattle were invaders. If the white men were hunting animals, they were taking away food from the Comanche. Conflicts were frequent. 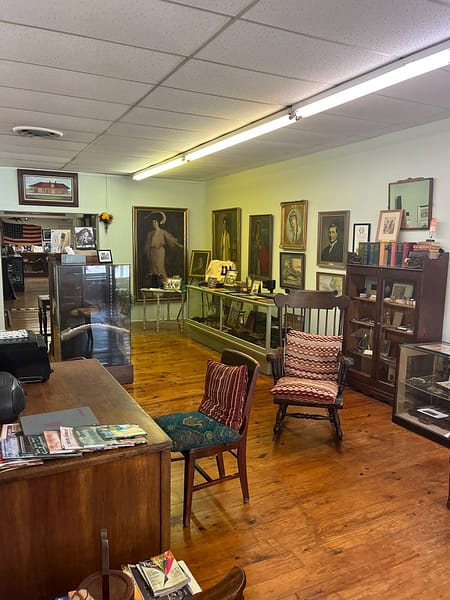 We liked the Irish connection and the town loves St. Patrick’s Day, so we’ll go along with the Irish name. The Dublin Historical Museum has a very large collection of photographs, signs, farming implements and more. Ben Pate does a great job of organizing sections of the museum to reflect a theme.

For example, the museum has a section for war memorabilia and another for what a typical kitchen might have looked like. He even has a church organ!

I was surprised to see an authentic spinning wheel in the museum. Maybe I shouldn’t have been surprised since Texas used to produce lots of cotton. In the early days, many farmers didn’t really understand that much about crop rotation and some of the cotton farmers had to leave the business and go into peanuts.

Peanut roasting is a local skill in Dublin. Even today, the PayDay candy company uses Dublin to roast their peanuts. Olam Edible Nuts in Dublin produces and processes many kinds of nuts, including peanuts, almonds, cashews and walnuts. But what makes this facility interesting is where these nuts end up. It dry roasts nuts for many different companies including Hershey, Nestle and General Mills. For the PayDay bar, Olam Edible Nuts is the only facility that dry roasts the nuts for the candy.

Ben also told us the story of the 1928 girls basketball team that won the Texas State Championship. Dublin was thriving at the time and the its high school built an indoor basketball arena. The majority of the smaller Texas towns did not have an indoor arena; teams practiced outside in local parks or on school grounds. In 1928, Dublin was very proud of the girl’s accomplishments and held a local game where they divided 15 girls into two teams and charged admission to the game. The proceeds went to buy sweaters for the girls and to support the Dublin school band.

We heard a great story about rodeos and Dublin. We thought rodeos were a Western thing; we had no idea that a rodeo was actually held in New York City. Tex Austin created the Madison Square Garden Rodeo in 1922. It was hugely popular since the West came to the East Coast. Austin produced a London Rodeo at Wembley Stadium, which was even more successful than the Madison Square Garden event.

Dublin has a place in rodeo history. In 1946, the Dublin, Texas, Rodeo Enterprises, Inc., with Clarence Leatherwood as president, constructed the Colborn Bowl, named after Everett Colborn. The bowl was the largest rodeo arena in the southwest at that time. The timing of the event was before the Madison Square Garden event. The cowboys and cowgirls called it the Pre-Madison Square Garden Rodeo. As soon as the Dublin performance was finished, the entire rodeo moseyed over to the train.

The cowboys and cowgirls were second to none and included Harry Tompkins, Jim Shoulders, Casey Tibbs, Toots Marifield and Tad Lucas. Many movie stars performed for the fans including Roy Rogers, Dale Evans, the Lone Ranger, Rex Allen and of course Gene Autry.

In exchange for 25 percent of the profits of the rodeo company, Gene Autry agreed to form Gene Autry’s World’s Championship Rodeo and Associates, with Everett Colborn as managing partner. Gene Autry talks about Dublin, Texas, in his movie The Blazing Sun because he made many friends in Dublin, as written in a letter by Jackie Autry addressed to the Dublin Rodeo Heritage Museum. Yes, there is another museum in Dublin that you need to see!

Ben Hogan is a very popular guy in Dublin since he was born there. I was not surprised that the museum had a few special items from his namesake professional golfer in the museum.

Our docent, Ben Pate, is a very modest guy. His father and brother were doctors, but he got his start in TV. He’s an accomplished author and has a voluminous memory of all things Dublin. He really enjoys helping people with local history and researching family histories. It’s a great place to learn about Dublin history and Ben is a terrific docent. After visiting the museum, you should mosey over and see Karen Wright at the Ben Hogan Museum.