Egypt: a place of history and enchantment. It should be on everyone's bucket list. Here are some history and fun facts to whet your appetite. 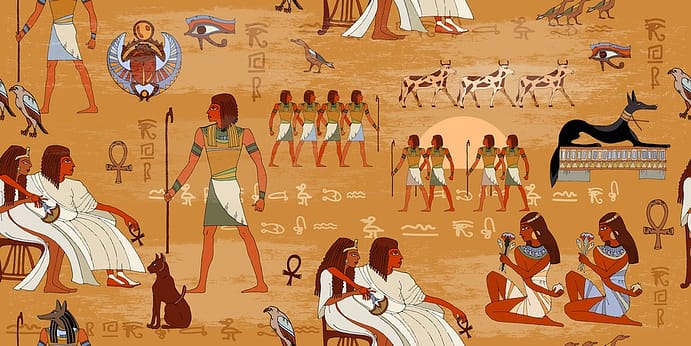 I’m sure there is much debate about the oldest civilization in the world. Humans were known to settle in Egypt as early as 40,000 B.C. From about 6000 B.C., the Nile was the main location for settlers. The Sahara region was so dry that they needed water for themselves, animals, and crops. By about 5,000 B.C. the people were weaving linen and making pottery. The making of bronze came later. From about 3100 to 332 B.C., when Alexander the Great arrived, Egypt was the most widely known civilization in the Mediterranean. The first Egyptian ruler that history recognized was King Menes. Some texts call him Narmer. He lived shortly around 3,100 B.C. during which Egypt was divided into lower and upper Egypt. In 3118 B.C., King Menes united the two and made Memphis the capital.

Then, Egypt was divided into 42 areas called nomes. Each nome was ruled separately with farmers paying taxes with a portion of their crops. Between 3100 and 2500 B.C., Egyptian rulers started building pyramids. Zoser built the first recorded pyramid about 2665 B.C. Other rulers followed including Sneferu and Khufu. Kings were given the title of pharaoh later, sometime between 1539 and 1292 B.C. The full title of an Egyptian king was quite long. It included five names, each preceded by one of the following titles: Horus, Two Ladies, Golden Horus, King of Upper and Lower Egypt and Son of Re. The last name was given to him at birth, the others at coronation.

The Egyptians believed the pharaoh to be the mediator between the gods and the world of men. After death, the pharaoh became divine, identified with Osiris, the father of Horus and God of the Dead. In his death the pharaoh passed on his sacred powers and position to the new pharaoh, his son. During the pharaoh’s reign, you’d typically see a snake on his crown, which were to spit fire on all enemies.

The rule of the pharaoh weakened in authority between 2181 and 2055 B.C. when the united Egypt split with civil wars between the rival areas. This period, called the First Intermediate Period, lasted until 2055 B.C., when King Mentuhotep II succeeded in reuniting Egypt. This was the beginning of the Middle Kingdom.

The Middle Kingdom lasted until 1650 B.C. During this great period, art and literature thrived in Egypt. Papyrus was used as a writing material as early as 3000 B.C. and continued until A.D. 1100. It was later adopted by the Greeks and used in the Roman Empire. Books were produced in rolls or scrolls. Many of the books eventually found their way to the great library in Alexandria.

During the Middle Kingdom, pharaohs strengthened their rule militarily and more pyramids were built. People from modern day Israel traveled to Egypt and settled there. From 1650 to 1070 B.C., another period began when the Hyksos seized power in northern Egypt. Southern Egypt was still controlled by Egyptian kings and in 1550 B.C., they drove out the Hyksos and reunited Egypt again.

From 1550 to 1070 B.C., Egypt controlled Nubia, the land to the south including modern day Palestine and Syria. The Egyptians built temples at Thebes, and pharaohs were buried in the Valley of the Kings. In 1364 B.C., Akhenaten became pharaoh. He worshiped only the sun god Aten.

However, his son Tutankhamen worshiped the old gods. We know more about Tutankhamen since his tomb was discovered intact. King Tut inherited the throne in about 1333 B.C. when he was only nine. His reign was only nine years, and his untimely death is suspicious with many scholars thinking he was murdered.

The next period is largely related to a variety of kings named Ramses. It lasted from 1300 to 1100 B.C. Eight kings reigned, all with name of Ramses. During this era, once again, Egypt split into two halves, north and south. Egypt was invaded and conquered at various times by Libyans, Nubians and Assyrians. In 747 B.C., Nubia conquered Egypt and restored unity. Nubia was a region on the Nile in what is today northern Sudan and southern Egypt. In 525 B.C., the Persians conquered Egypt. Then in 332 B.C., Alexander the Great conquered it.

After Alexander’s death, a line of Macedonian kings, beginning with the general Ptolemy, ruled Egypt. He was Alexander’s general and ruled during the Ptolemy era with his descendants and Cleopatra until 31 B.C. when Rome conquered it. Much has been published about the romance between Cleopatra and Marc Anthony.

Arab rulers governed Egypt until it became part of the Ottoman Empire in 1517. The Ottomans ruled a multinational empire that consisted of Turks, Europeans, Asians and Africans. But Egypt was not prospering. The economy was weak, and its people endured plague and famine. Napoleon briefly invaded Egypt but was pushed out by the Ottoman Turks.

During Ottoman rule, work on the Suez Canal began. In 1869, the Suez Canal was completed after ten years of construction. The project nearly bankrupted Egypt. The country owed debt to Great Britain along with many other European countries. Great Britain took over Egypt in 1882. In 1914, Egypt was established as a British protectorate. In 1922, the country regained independence under King Fuad I. This lasted until 1952 when the military took over. The new ruler was Muhammad Ali Pasha from Albania, and this rule lasted until 1952. Nasser officially assumed power in 1956 after forcing General Naguib out in 1954. Britain was forced to leave, and Nasser nationalized the Suez Canal.

Nasser died in 1970, and then was succeeded by Anwar Sadat, who switched allegiance from the Soviet Union to the United States. Sadat attempted to move Egypt toward peace along with President Carter of the United States and Menachem Begin of Israel. Sadat later was assassinated in 1981.

Hosni Mubarak ruled until 2011 and the Arab Spring. Mohamed Morsi briefly took over when another uprising took place, and the military took over and forced Morsi out. Adly Mansour became acting president in 2013. And in 2014, Abdel Fattah el-Sis won in an election. He remains president today.

One hundred million people live in Egypt spread over 384,0000 square miles. Tourism has always been a big portion of the Egyptian economy. This peaked in 2010; after the civil unrest of the Arab Spring, tourism has never regained the same level. In 2010, Egypt tourism amounted to $12.5 billion. Tourism revenue in 2015 was less than half that amount. The COVID pandemic affected tourism all over Egypt. In 2020, the tourism dollars were $3.8 billion. With COVID seemingly under control, tourism in Egypt hopefully will rebound. Now might be a good time to consider travel to Egypt if it’s on your bucket list.

Madeline and I have traveled to Egypt, spending our time mostly in Cairo. There is plenty to see there with the pyramids, the Sphinx, the busy Nile and more.

I heartily recommend a day trip to Alexandria (also booked on Viator). The Great Library of Alexandria was one of the largest and most significant libraries of the ancient world. The library was part of a larger research institution called the Mouseion, which was dedicated to the Muses, the nine goddesses of the arts.

Ptolemy II Philadelphus is credited with building the library, and it quickly acquired many papyrus scrolls, owing largely to the Ptolemaic kings' aggressive and well-funded policies for procuring texts. It is unknown precisely how many such scrolls were housed at any given time. But estimates range from 40,000 to 400,000 at its height. Many important scholars worked at the library during the second and third centuries B.C., including Apollonius of Rhodes, Eratosthenes of Cyrene, Aristophanes of Byzantium and Callimachus, who wrote the Pinakes, which is considered the world’s first library catalog.

It was thought the library was destroyed by fire. But others think it simply declined in size and quality when rulers changed. The library dwindled during the Roman period from a lack of funding and support. The new library is amazing and worth a visit as is the port of Alexandria.

Another day trip from Cairo to consider is Memphis, Dahshur and Saqqara, which are a two and a half hour drive south of Giza. Memphis is the ancient capital of Egypt. Saqqara is the site of Egypt’s first pyramid. It does not look like the ones you see in Cairo. The Pyramid of Djoser (the Step Pyramid) is quite impressive. And Dahshur is the site of a royal necropolis. It chiefly is known for several pyramids, two of which are among the oldest, largest and best preserved in Egypt, built from 2613 to 2589 B.C.

There are two other cities in Egypt that Madeline and I want to visit: Aswan and Luxor. Aswan is famous for the Aswan dam built across the Nile between 1960 and 1970. It was built to better control flooding, provide increased water storage for irrigation and generate hydroelectricity. Many travelers go to Aswan because they want to see Abu Simbel. Many tour boats stop in Aswan, and then travelers take a separate tour to see Abu Simbel. You also easily can fly to Aswan from Cairo.

Abu Simbel is one of the most famous legacies left from ancient Egypt. The huge temples carved into the side of the Nubian cliffs draw thousands of travelers from around the world every year.

Luxor has been known as Thebes, the great capital of the Egyptian Empire. The name Luxor comes from the Arabic word for palaces. Luxor is home to an unrivaled number of ancient Egyptian monuments including the 3400-year-old Luxor Temple, the Karnak Temple Complex, the necropolises of the Valley of the Kings and the Valley of the Queens, and the massive stone statues known as the Colossi of Menmon.

Two other cities worth mentioning are Hurghada and Sharm El Sheikh. Hurghada boasts beautiful beaches and perfect crystal-clear waters for diving and snorkeling. Like Sharm El Sheikh, Hurghada was a tiny fishing village before Egypt's 1980s tourism boom. Resorts and tourist amenities rapidly sprung up, as did an international airport with connections to many European cities, making it a popular beach holiday destination.

Sharm El Sheikh's popularity lies predominantly in its fabulous year-round climate and beautiful natural beaches. Calm, crystal-clear waters and diverse marine life make the city a haven for scuba diving and enjoying the resort life. Both cities are popular with Europeans and Africans but is unknown to others.

There is so much to experience in Egypt. We want to soak up more of Egyptian history. We can’t wait to return!

Africa: A Continent You Should Explore

Read More
Africa: A Continent You Should Explore