Fiji is a piece of heaven in the Pacific Ocean. Having visited as a tourist, and then lived there for a few years, we offer a unique look at this paradise.

Fiji is made up of more than 300 islands. But people live on only 100 of them. The islands of Fiji lie northwest of Australia and not far from American Samoa. Viti Levu and Vanua Levu are the two primary islands. They’re the biggest, and around 90 percent of the Fijian population live there. The capital of Fiji is Suva located on Viti Levu with around 170,000 residents. Fiji has a wonderful climate year-round; rain falls regularly and predictably in many areas.

Fiji was widely known as the Cannibal Islands. Britain began its rule over Fiji as a colony in 1874. It continued that rule until 1970. The sugar cane industry became big business under Britain’s rule. The need for laborers for this industry resulted in the immigration of more than 60,000 indentured servants from India.

Indians who immigrated were told they would work five years as slaves and five more years as free laborers. After those 10 years, they had the option for a paid trip home. Alternatively, they could stay in Fiji as a British subject.

In 1920, the indenture system ended. Those who had immigrated were upset with failed promises. And it became difficult to find Indians to immigrate to Fiji to work. The British created a Fiji Constitution specifying that Indians could not own land. Indians considered this blow unfair since they had no voice in the country.

After British rule ended in 1970, Indians and native Fijians made up equal portions of a population of nearly 700,000. Today, Indians are involved in all areas of business and commerce. Native Fijians also run businesses. But many remain in tribal communities and live off the land and sea.

Fijian, English and Hindi are spoken everywhere. Everyone you meet is cheerful and pleasant. The Fijian way of life is slower than what Westerners might expect. When in Fiji, you’ll automatically slow down. In our local town of Savusavu, most stores close at noon on Saturdays. And only the bread store is open Sunday.

You’ll find no warmer people than Fijians. You’ll hear bula everywhere, which means hello. And the person saying it always says it with a smile. Fijians welcome foreigners with open arms. Everyone you meet serves as a terrific ambassador for the beauty and charm of Fiji.

The climate in Fiji is warm all year. Temperature highs range from 78 to 88 degrees. It’s divided into two seasons: the warm season from November to April; and the cold season from May to October. Cyclones can be frequent and devastating during the warm season.

Much of the Fijiian islands are mountainous. With the warm weather and plenty of rain, everything grows with ease. 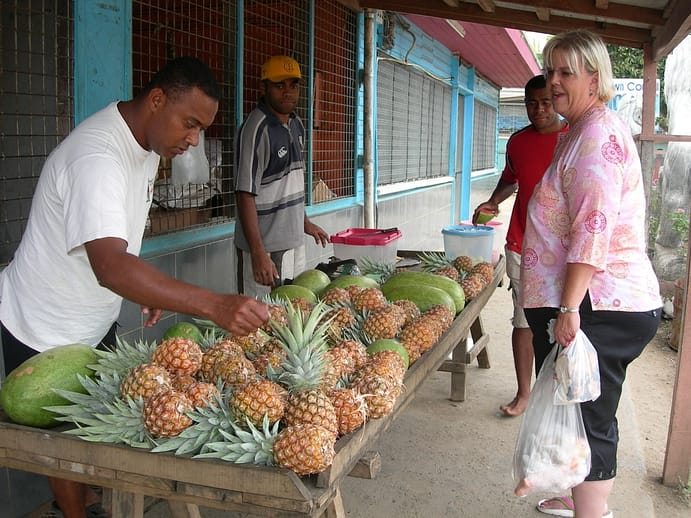 Shopping for fresh fruit in Savusavu

We were amazed at the abundance of fruit trees: coconut, lemon, banana, papaya, avocado and mango everywhere, in the wild and on private property. Many people can’t eat all the fruit themselves, so they give it away to family, neighbors and friends. Banana trees grew all over our property. We would eat bananas every day; Madeline made banana bread, banana muffins, banana cookies, banana cakes, banana coffeecakes, banana pancakes and banana fruit salads. We still had to give away bananas and the goodies we made from them. 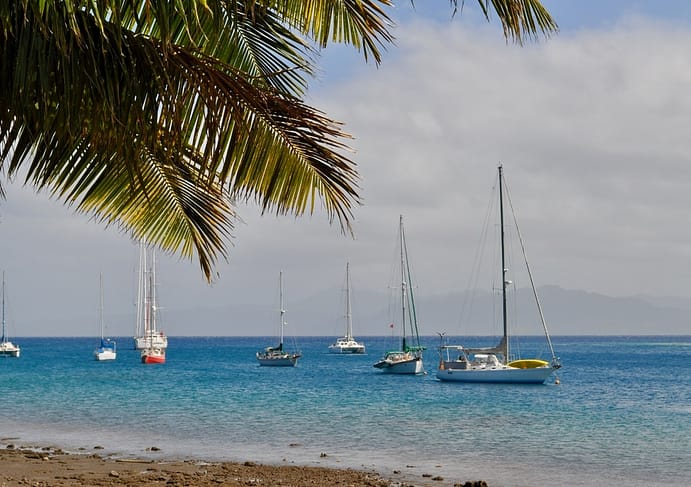 The water around Fiji is splendid and full of colorful fish and beautiful reefs. With or without snorkel gear, there are plenty of places to swim and enjoy undersea wildlife. Scuba divers have plenty to look forward to. Ask the locals for a snorkel spot or find a tour to take you out farther for snorkeling or diving. Surfers will find some of the best waves in the world here. Many come from around the globe to surf them. And the water always is warm and clear.

The kava ceremony ranks as Fiji’s most famous tradition.

It is respectful when you have a home to pay homage to the local chief and have kava with him.

Yaqona or kava, comes from a pepper plant. The root is ground into a fine powder and mixed with water. The drink is prepared in a tanoa, which is a large wooden bowl. After the mixing, it looks like muddy water.

If you are a visitor, you are offered a wooden cup that many times is a carved from a coconut shell called a bilo. The visitor claps once and says bula before drinking down the entire cup. Then the visitor claps three times. The cup moves around everyone seated in a circle until all the kava is gone. This takes a while, as the tanoa is usually large. For visitors, this is an important drink to welcome you. The taste of kava may not be everyone’s favorite, but you should at least try it once to show respect if it is offered by your host.

The food in Fiji is very good. Many restaurants serve delicious Indian food. There are plenty of other choices, including seafood, pizza, Chinese and burgers. Seafood is fresh and plentiful, and you can find it in most local markets and restaurants. Fresh vegetables also are widely available.

International flights arrive at Nadi International Airport (pronounced nandy), which is outside the city of Nadi on Fiji’s biggest island, Viti Levu. If you’re going to another island, you’ll take a local plane to fly to your final destination.

Keep in mind you’ll by flying in a much smaller plane. A lot smaller. These planes are safe, and the pilots are great. But if you’ve not flown a lot or are anxious on planes, be prepared. We lived on Venua Levu and regularly flew to the airport in Savusavu. The pilots fly only in the daytime and are expert in getting you there and back safely.

Lots of hotels and restaurants surround the Nadi airport and abound in Nadi itself. But it’s probably not where you are going to stay for an extended time. It’s an airport town so finding tours, taxis, hotels and restaurants is straightforward.
There’s a shopping area nearby in Namaka and plenty of restaurants in Martintar. Denarau Island has an international golf course and upscale hotels. Many people choose to invest in vacation homes here.

We’ve stayed at the Tanoa International Hotel a few times when we’ve had business in Nadi or had to wait for a connecting flight. It’s close to the airport, and the service is excellent. The staff will introduce you to kava if you have interest.

Suva on Viti Levu is the capital of Fiji. You’ll see the British colonial influence in much of Suva architecture. A typical Fiji business building looks a lot like what you’ll find in India. As the home of the Fijian government, much business is done in Suva. Quite a lot of people live in or around Suva working in the government, restaurants, bars, hotels and the tourist industry.

Cruise lines frequently stop at Suva, with massive groups of tourists going on excursions in the city.

We stayed at a Holiday Inn while in Suva and were impressed by its convenience and service.

From Nadi International Airport, it’s a short taxi ride to Denarau Island. The island has many hotel chains, including Westin, Hilton, Sofitel, Radisson and Sheraton.

A complex for restaurants and shopping has a Hard Rock Café. Many man-made lakes and an international golf course make Denarau Island a beautiful place to relax.

If you stay at a hotel on Denarau Island, you find shops and restaurants within the space. It’s a great way to stay in one place and relax and enjoy the island life.

We lived for several years just outside of Savusavu on Fiji’s second-largest island of Vanua Levu. Our home sat on a hill, giving us a panoramic view of the mountains and sea. We did most of our business in Savusavu, including shopping and eating out.

There are two airports on Vanua Levu: one at Savusavu and the other at Labasa. Savusavu is the smaller of the two airports, allowing only small propeller aircraft during the day. Labasa can support slightly larger aircraft, which makes the trip to and from Nadi faster. But it’s on the other side of the island.

When we first visited Savusavu, we stayed at the Namale Resort. This beautiful resort is expensive, but the grounds, service, food and activities offered are second to none. We immediately fell in love with Fiji and wound up buying a house nearby before we left the island. There is so much to love about Fiji: the generosity of the people, the weather, the food, the lushness of the land and the laid-back pace of life in Savusavu.

Savusavu town is basically a one street town along a beautiful bay. There are multiple banks, hardware stores, grocery stores, clothing stores, etc. Much of the food in the groceries only arrives on the island by ferry, which shows up only twice a week, so it didn’t take long for us to become accustomed to knowing when the grocery would receive new inventory.

There is a very nice mix of restaurants and hotels. Some hotels cater to the surfers and backpackers where others are very upscale to attract honeymooners, vacationers or businesspeople. There is something for everyone in Savusavu.

We ate at the Captain’s Café in Savusavu from time to time. They made fresh pizza to order and offered fresh fish every day. Outdoor tables afforded a beautiful view Savusavu Bay with sailboats and yachts. Experiencing the slow island life pace doesn’t get much better.

We stayed at the Savusavu Hot Springs Hotel a few times. It’s walking distance to downtown and set a hill with a beautiful view of the town and sea.

I hope this gives you an overview of this wonderful and beloved country. We loved our time in Fiji and look forward to going back.

Read More
Oceania: One of the World’s Seven Continents You Need to Explore

Traveling to The Bahamas: History and Tourism

Read More
Traveling to The Bahamas: History and Tourism