Go to a Ball Game in Japan

Madeline and I have spent a lot of time in Japan. I lived and worked three different times in Tokyo. Once I felt comfortable navigating around city, I thought it’d be fun to go to a baseball game.

While we were living in Tokyo, our editor, Jason, visited. He wanted to go to a baseball game, so This was the perfect time to experience a Japanese ballgame. I arranged to get tickets to the Tokyo Yakult Swallows. 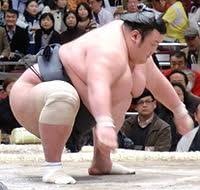 I suppose most people who go to Japan want to go to a sumo wrestling match. To see something so uniquely Japanese is a great idea. But baseball runs for eight months out of the year in Japan. It’s much easier to catch a baseball game than it is to time your visit for sumo wrestling. And baseball tickets are easy to get. 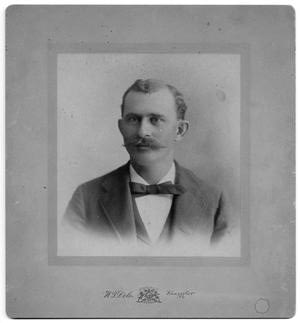 One of the first things I wondered is why the Japanese love baseball so much. It’s America’s pastime and not a feudal-era Japanese sport. Horace Wilson, an American English professor, introduced baseball to Japan in 1872. Baseball was slow to develop but the first professional games were played in the 1920s. The first professional league came in 1936. Now, baseball is more popular than sumo wrestling in Japan. They watch it on TV, listen on the radio and go to games.

The talent of Japanese players is now legendary. American baseball scouts watch them all the time. It used to be American players went to Japan to play and hopefully get called back to the major leagues in the United States. Now, Japanese baseball players improve teams throughout Major League Baseball. Some Japanese stars that you might have heard of include: 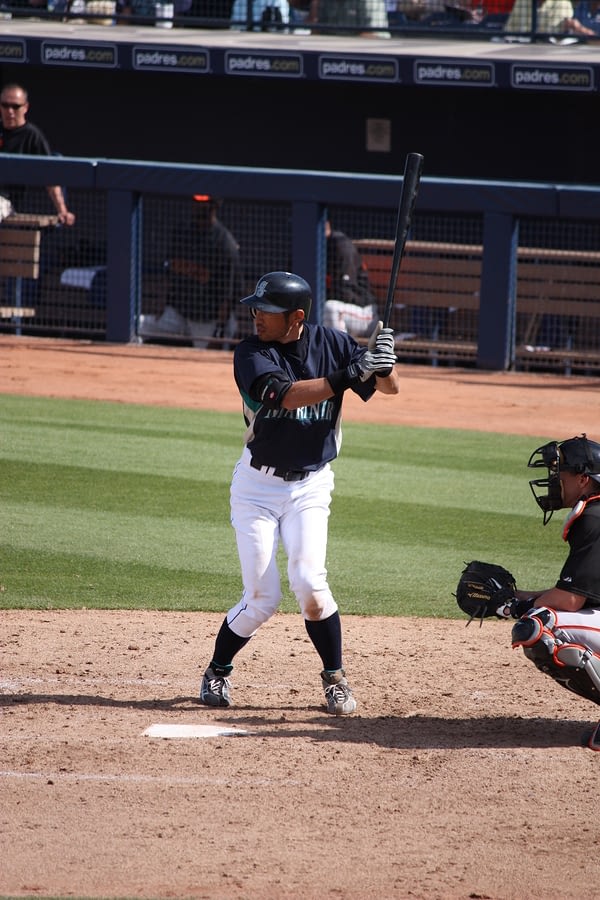 All these players have made a big impact in the major leagues, but let’s talk about Ichiro Suzuki, known as simply Ichiro.

Jason went to college in Seattle and loved watching Ichiro play for the Mariners. Ichiro was almost always on base. He is recognized as having the most hits in baseball. Ichiro played a total of 28 seasons both for Japanese and American teams. Ichiro’s hit total included 3,089 with the major leagues and 1,278 with Nippon Professional Baseball for a total of 4,367. This is the most ever for any professional baseball player.

Ichiro was a MLB all-star 10 times and set a single season record for hits in 2004 with 262. If you follow American baseball, you know how humble Ichiro is. He was always focused on his team and never about his own personal glory.

Japanese professional baseball is run by Nippon Professional Baseball. NLB consists of two professional leagues: Central and Pacific. Each league has six teams, and two of them make their home in Tokyo: the Yomiuri Giants and the Yakult Swallows. 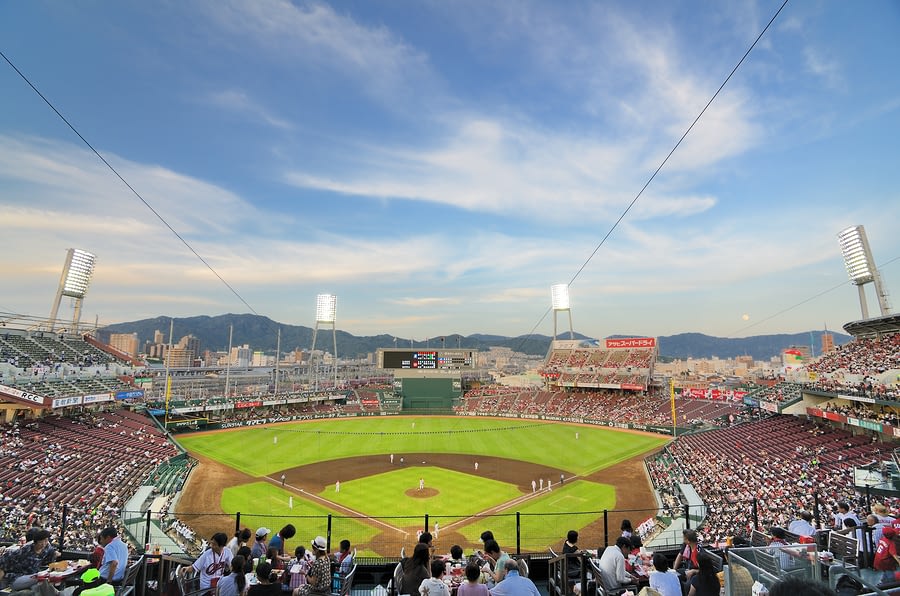 When Jason visited, we also went to Hiroshima. We wanted to respectfully visit the city devasted by the first atomic bomb. Jason, being a car aficionado and Mazda fan, also wanted to visit the Mazda Museum. Mazda was founded and is still headquartered in Hiroshima. We didn’t have time to see the local team, the Hiroshima Toyo Carp, a Central League. They play in a stadium called Mazda Zoom-Zoom Stadium. 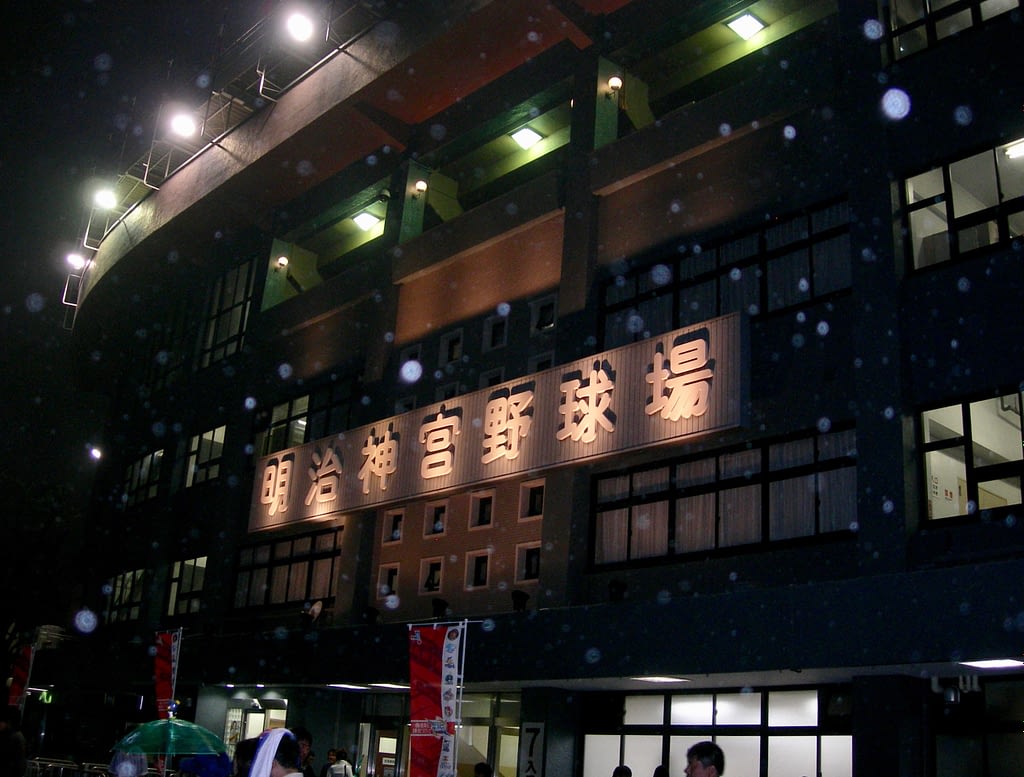 The Tokyo Yakult Swallows were founded in 1950. Its home field, Meiji Jingu Stadium built in 1926, is the oldest baseball stadium in Tokyo. It’s located in Shinjuku. When we went to the Swallows game, we felt the team was like the Chicago Cubs. They’re not a powerhouse team like the Giants. They’ve won a few Japan Series championships (the Japanese equivalent of the World Series) but they’re not a winning team year in and year out.

The Swallows play in an old, open-air stadium like the Cubs play at Wrigley Field (1914). Like the Friendly Confines, it’s dated yet cozy with lots of character. 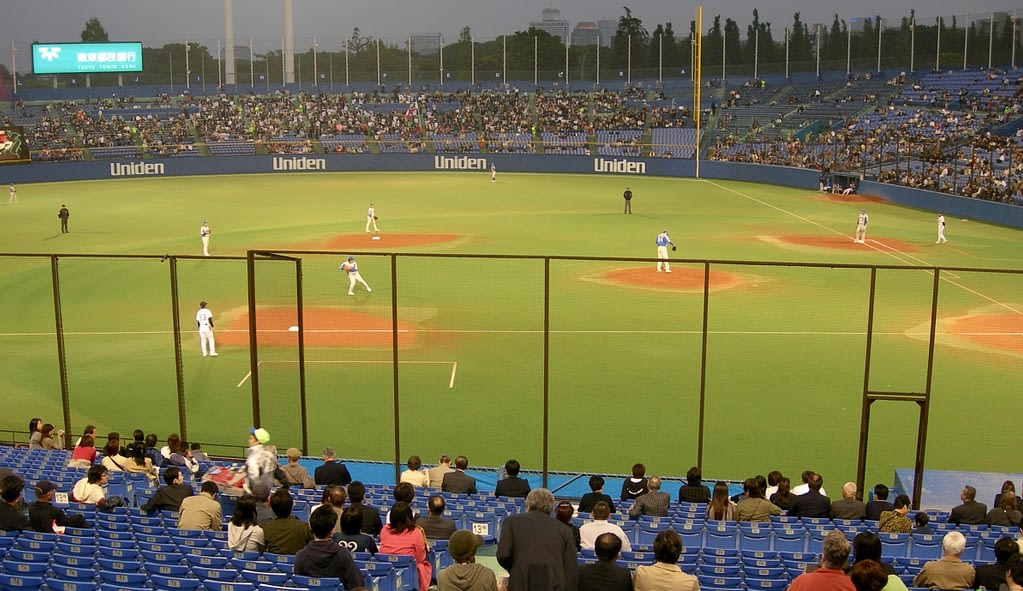 There are many differences between Japanese baseball game versus a major league game. The rules are nearly the same, but with some differences. One is that a game can end in a tie. If a game is tied after nine innings, only three more innings are allowed. If a game is tied, it’s called a draw. A draw is considered honorable (of great importance to the Japanese) because both teams are victorious. But the main reason ties is to give fans time to take the train home after the game. 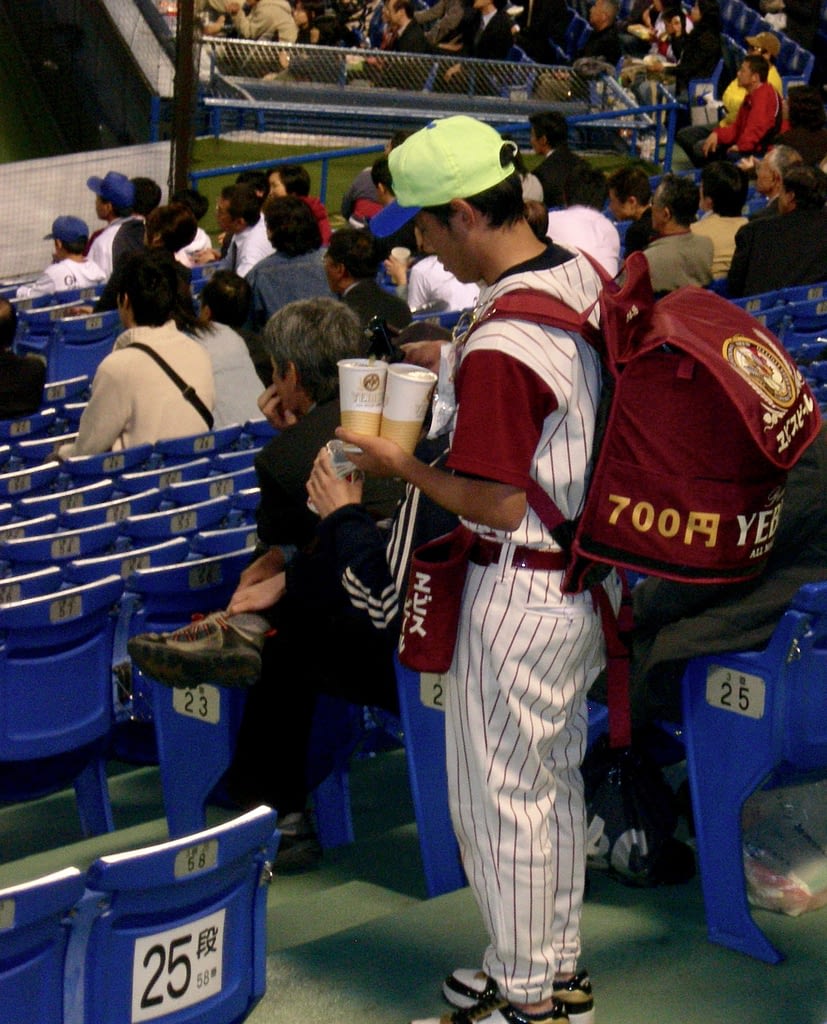 The ambiance of Japanese baseball games is quite different. You’ll likely notice the beer vendors. Commonly called the beer boy or girl, they wear their team’s uniforms and walk around wearing beer kegs as backpacks. After you call one over, they’ll draw a beer right at your seat. A cup of Kirin was around $7 USD, which is about normal for beer prices in Tokyo.

If you are a home-team fan, you sit in the designated area for your team. This is easily seen by the team colors, banners, flags, rattles and horns. Like in the major leagues, there are special supporting theme songs for each player, which are played as he goes to the batter’s box. We also noticed a fan activity with umbrellas and balloons. Fans opened and closed their balloons from time to time, always in unison. Occasionally, they’d let balloons go in the air.

Assuming you have hometown seats, you’ll be in the area of ouendan, which is the cheering squad of fans. Everyone is for their home team players and they sing, wave banners, and bang away on drums while their team is at the plate.

Each team’s cheerleading squad performs to warm up the audience. Yes, cheerleaders in baseball. 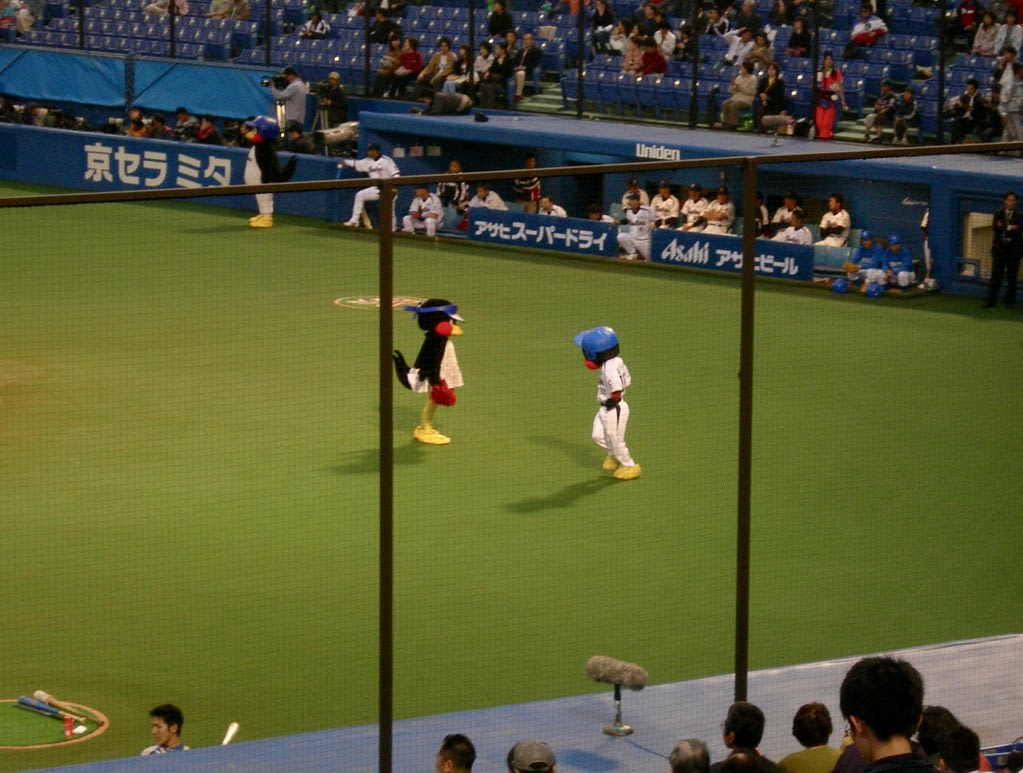 Each team also has their own mascots who engage in humorous activities between innings. 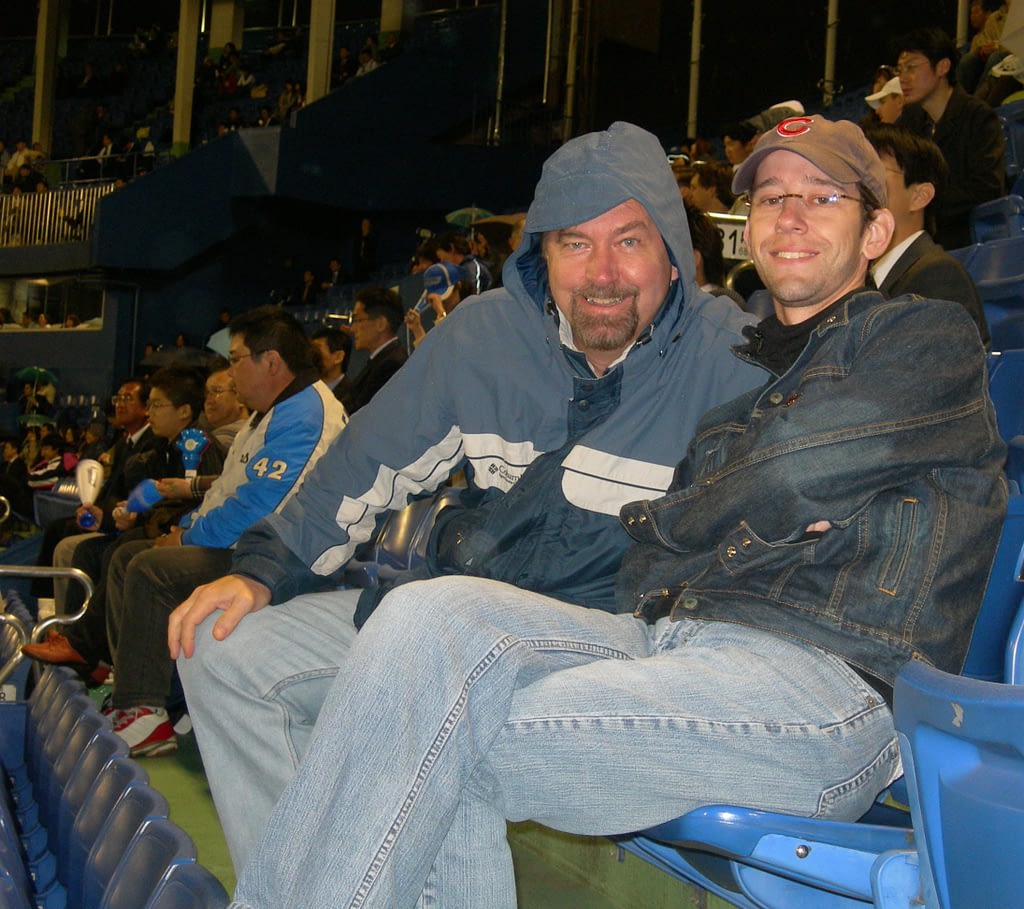 Unlike the Tokyo Dome, Meiji Jinju Stadium is open, so we needed to dress for the occasion. Unfortunately, it was cold, and it rained from time to time. The weather didn’t dampen the enthusiasm of the hometown fans! 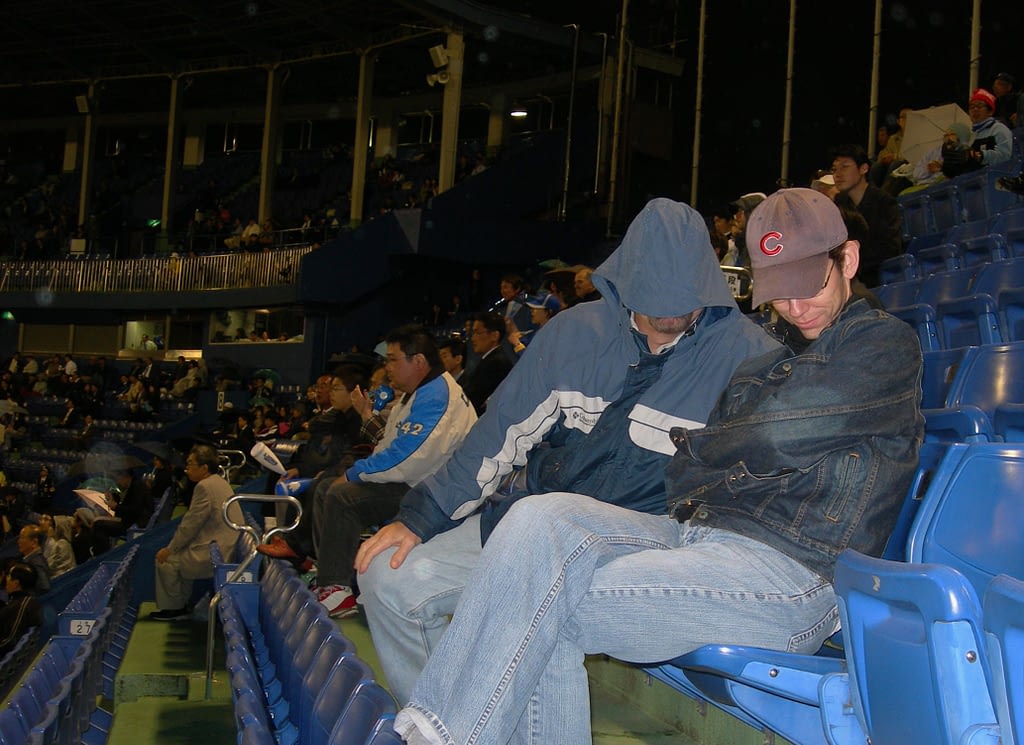 When it rained harder, we dug in and tried to wait it out. It didn’t last long. We saw the game in May and expected it to be a little chilly or rainy. 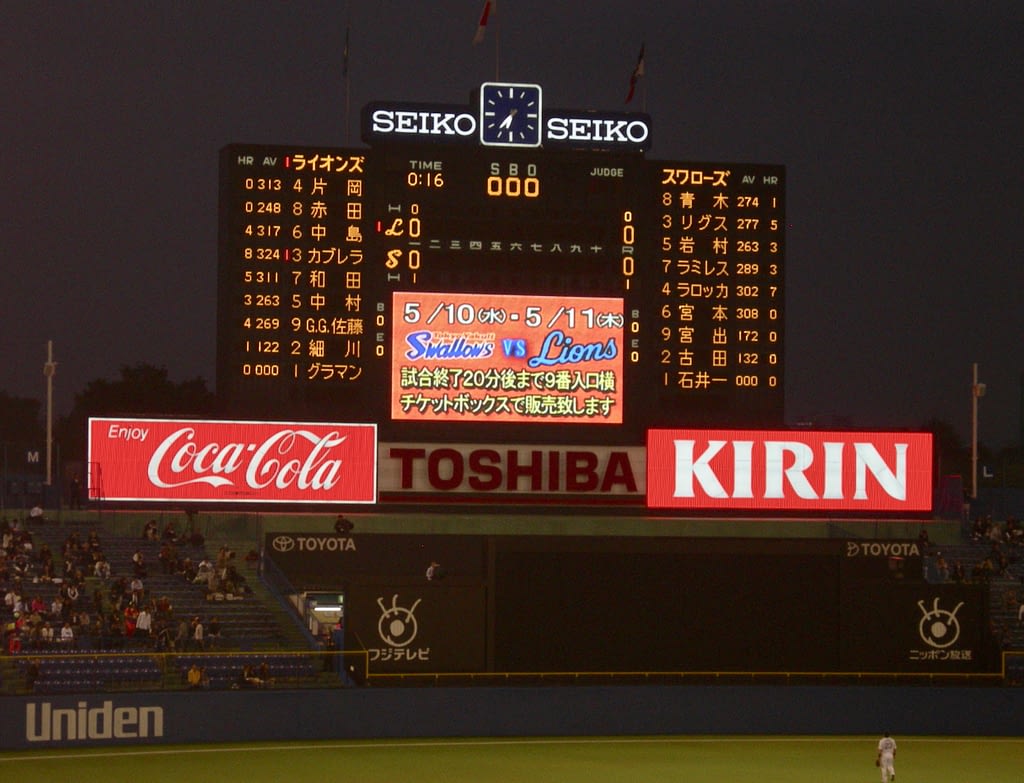 Of course, the scoreboard is in Japanese but occasionally we would see things we could read. 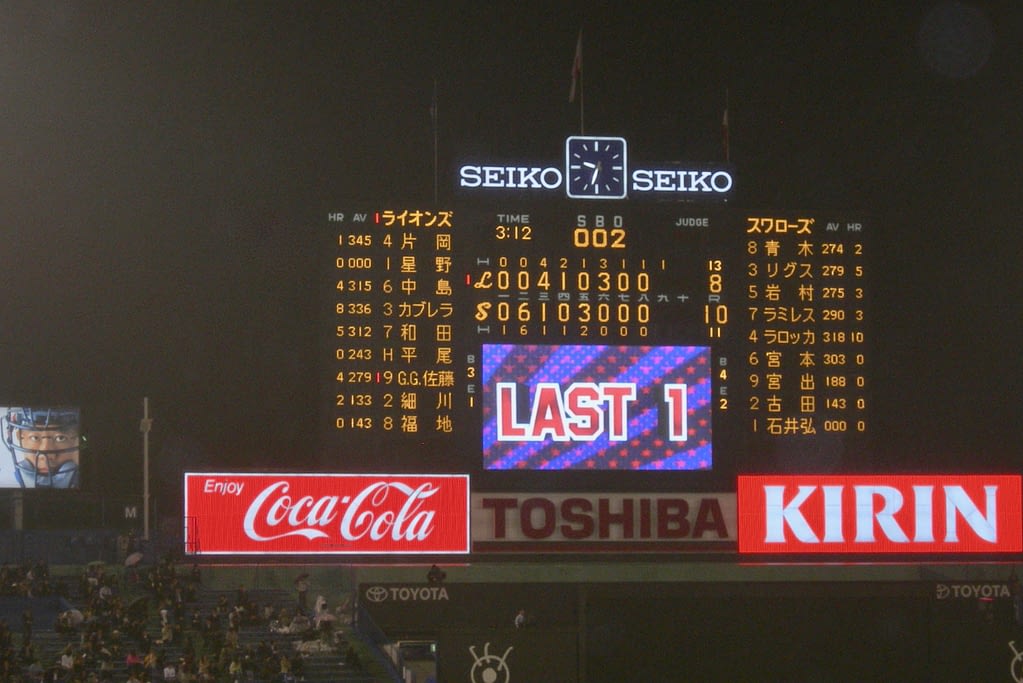 Jason and I are diehard baseball fans, so we stayed until the end. Madeline was getting cold and wondered when it would ever be over. The Swallows hung on to victory, and the hometown fans were reenergized and sang even more songs praising the victory and the courage of the players.

If you want to go to a Japanese baseball game, you’ll need tickets. Most hotel concierges can help with this. You also can go to JapanBallTickets.com.

There’s a pretty steep delivery fee of around $60 USD for this service, but the tickets will be securely delivered to your hotel.

You also can just go to the game and buy tickets at the stadium. The Tokyo Dome can seat more people, but it also tends to be the more popular team in Tokyo. We loved going to the Swallows game, even though it was cold. Wherever you go, see a baseball game in Japan!