6666 Ranch is one of the Texas' largest. Maybe you know it from the series Yellowstone. Here are some facts about the ranch and its future.

If y’all are fans of the TV series, Yellowstone, you probably know what I’m talking about. When Madeline and I watched season four, the 6666 Ranch makes an appearance. I thought it was a fictional ranch like the Yellowstone ranch itself. But it’s a real working ranch. Paramount put out a synopsis which said the following:

Founded when Comanches still ruled West Texas, no ranch in America is more steeped in the history of the West than the 6666. Still operating as it did two centuries before, and encompassing an entire county, the 6666 has inspired a new scripted series where the rule of law and the laws of nature merge in a place where the most dangerous thing one does is the next thing. The 6666 is synonymous with the merciless endeavor to raise the finest horses and livestock in the world, and ultimately where world-class cowboys are born and made.

During season 4, the show even used real cowboys from the ranch as actors for a few weeks. If you are familiar with the series, Jimmy, played by Jefferson White, was sent to the 6666 Ranch to learn cowboying and horse breeding. Madeline is much more geographically adept than I am. She found the 6666 Ranch on our trip to Lubbock. This is clearly not an attraction or tourist spot. She took the picture from our car. However, we are huge fans of Yellowstone, 1883 and anything else coming out of the Taylor Sheridan production company associated with Paramount. More on Taylor later. Now, let’s take a look at the ranch.

Legend has it that the history of the ranch began with a poker game and a winning hand of four sixes. Nobody seems to be able to verify the story, but it’s a good one. The facts show that Samuel Burk Burnett started the 6666 Ranch. And he became one of the most influential and prosperous cattlemen in the history of Texas.

Samuel Burk Burnett was born in 1849. At the age of 19, he purchased 100 head of cattle that had been branded with the 6666 brand. Soon thereafter, he started leasing and ultimately purchasing ranches and expanding his ranching operation. Around 1900, he purchased the 8 Ranch near Guthrie in King County. He soon purchased the Dixon Creek Ranch in the Texas Panhandle and began to expand the 8 Ranch into what now is known as the 6666 Ranch. In 1917, he built “the finest ranch house in West Texas” at Guthrie. President Roosevelt, Will Rogers and the Chief Quanah Parker have all visited 6666 Ranch. In 1921, oil was discovered on the Dixon Creek Ranch. And in 1969, a major oil field was discovered on the 6666. 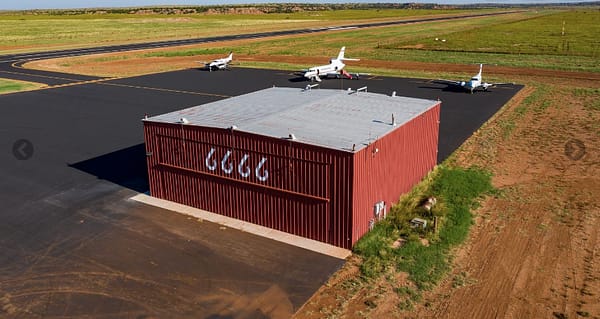 So, 6666 Ranch is spread over three properties totaling more than 266,255 acres. The 6666 Ranch in Guthrie contains 142,372 acres. The Dixon Creek section spans 114,455 acres of land in Carson and Hutchinson counties. The third division is Frisco Creek, with 9,428 acres located in Sherman County. Of course, the Guthrie location also has its own airport hangar, landing strip and pilots’ quarters. It’s not the biggest ranch in Texas. That honor goes to the King Ranch which is over 825,000 acres.

To make things even more interesting, by the time we got home from our Lubbock trip, we found that the 6666 Ranch was sold. The sale was made to a group led by screenwriter and producer Taylor Sheridan, who grew up in Texas and graduated from R.L. Paschal High School in Fort Worth. Sheridan is the cocreator and producer of the TV series Yellowstone and a spin-off series 1883. Much of 1883 was filmed in Fort Worth. The success of Yellowstone has created interest in another series from Sheridan based on the 6666 Ranch.

Now that Sheridan is part owner of the 6666 Ranch, he’s creating a new TV series spinoff, with a working title 6666. As of this writing, the series is still in development. No filming or premiere date has been set.

So, if you are traveling through Texas, you might take a little detour to see one of the three 6666 Ranch properties. If not, you’ll probably be able to see them on a Paramount show!