Texas' own Buddy Holly is honored with a museum in Lubbock. We visited and enjoyed learning about this rock legend. Here's our review.

Buddy Holly was born in 1936 as Charles Hardin Holley. His mom called him Buddy and somewhere along the line, he lost the letter e in his last name. His mom was musical, and his siblings played violin and guitar. In high school, Buddy partnered with friends to play music all over Lubbock. He and his band opened for new car dealerships, high school dances, bank openings and any other event they could book. It was said that if someone opened a pack of cigarettes, Buddy and his band would probably be playing. 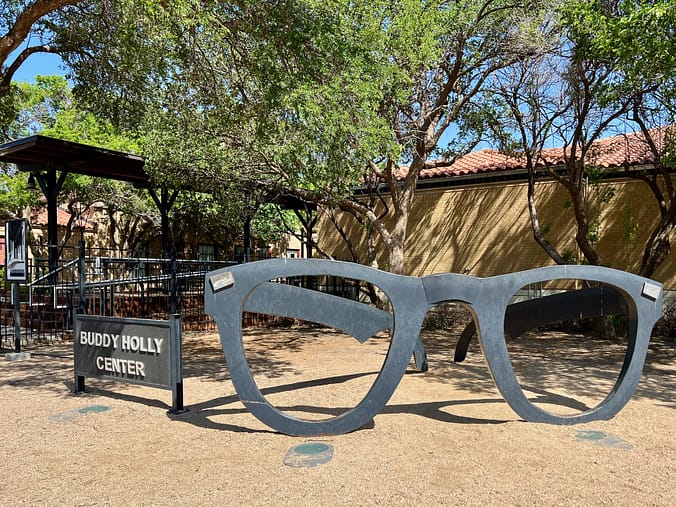 Buddy had poor eyesight as a kid and went through a series of eyeglasses. He hated wearing them but had 20/800 vision in both eyes. He needed glasses whether he liked them or not. As he was developing into a solid musician, he wanted to be like other musicians who did not wear glasses. None of his rock ‘n’ roll idols wore glasses.

It was the Everly Brothers who told Buddy that glasses did not have to be a problem for the star. He simply had to make a statement with them. He found a pair of thick black frames that worked well Eventually those glasses bolstered his popularity. His glasses were so iconic, a giant sculpture of his glasses sits in front of the Buddy Holly Museum.

His first group was with his friend Bob Montgomery. In 1955, Buddy and Bob opened for Elvis three times. Buddy shifted his style from country to rock ‘n’ roll. He opened for Bill Haley & His Comets later that year. A scout heard the performance and signed him to Decca Records.

Holly met producer Norman Petty in Clovis, New Mexico, with his friend Jerry “J.I.” Allison, who was a drummer. Bassist Joe B. Mauldin was recruited shortly thereafter. Allison and Holly wrote many of their songs in Allison’s bedroom in his parent’s house. The Crickets were born in 1957.

Buddy Holly and the Crickets were one of the first rock ‘n’ roll bands to write, play, produce and record all their own material. They were among the first rock bands, too, to utilize overdubbing and multi-track recording years before it became standard studio practice.

The band released “That’ll Be the Day” in September 1957 and credited to The Crickets. Buddy and his band toured to promote the single. In October, they released “Peggy Sue.” Both songs were immediate hits.

The new Crickets embarked on a tour of the midwestern United States. They toured in cars and buses that froze up regularly. Frustrated with travel, Buddy chartered an airplane to travel to his next show, in Moorhead, Minnesota. Soon after takeoff, the plane crashed killing Holly, Ritchie Valens, the Big Bopper and pilot Roger Peterson. Don McLean later referred to the tragedy in his song "American Pie" as "the day the music died." 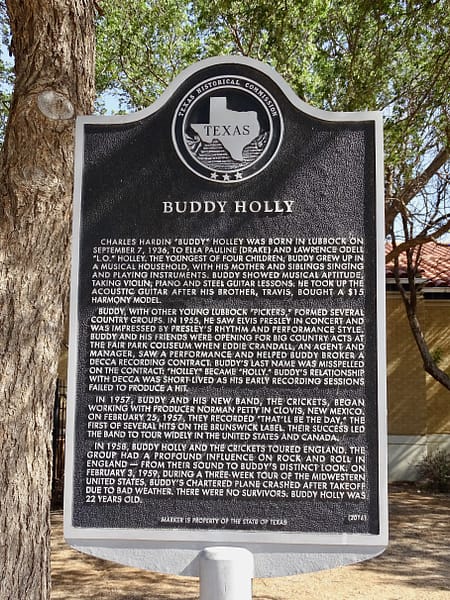 At the Buddy Holly Museum, a Texas historical marker provides a bit of Lubbock and Buddy Holly history.

The museum has many rooms with lots of Holly memorabilia. They even have the bedroom furniture from Buddy’s parents’ house when he was a teenager. They have many of his guitars, private letters, records and tour posters.

Next to the museum is Jerry Alison’s original home. But it’s not in its original location; it was moved to be next to the museum. Some of the original artifacts from the home were lost in the great Lubbock tornado but many still remain.

Alison supervised the reproduction of any interior items to be sure they were just like he remembered as a kid. The home’s tour is separate from the museum’s. A docent provides the tour if there are enough people in the museum. Both the museum and the home are worth your time.

Some of music’s greats are honored in the museum and recognized with plaques at the West Texas Walk of Fame.

Across the street from the museum stands a larger-than-life statue of Buddy Holly along with plaques recognizing other West Texas artists who received the lifetime honor.

The West Texas Walk of Fame began as a tribute to rock ‘n’ roll legend Buddy Holly in the late ‘70s. Larry Corbin and Jerry Coleman, both close friends of Buddy Holly, were in Nashville visiting their singer/songwriter friend Waylon Jennings. Waylon brought up the subject of recognizing Buddy Holly. This conversation culminated into a concept of honoring the growing list of famous artists and musicians who had come from West Texas. As interest grew, Grant Speed was commissioned to create the heroic-sized statue of Buddy Holly. In 1979, a concert was held to help pay for the statue, and a plaque was placed around the base to honor the first inductee of the walk of fame, Lubbock's own Buddy Holly. A second concert was held in 1980 and Littlefield's Waylon Jennings became the next inductee.

West Texas has produced quite a few musicians who have received the honor of the West Texas Walk of Fame. Some notables include Mac Davis, Jimmy Dean, Bobby Keys, Tanya Tucker, Roy Orbison, the Gatlin Brothers, Delbert McClinton and Natalie Maines.

Paul McCartney once said that if it wasn’t for Buddy Holly, there would be no Beatles. "One of the main things about the Beatles is that we started out writing our own material," explains Paul. "People these days take it for granted that you do, but nobody used to then. John and I started to write because of Buddy Holly.

At the walk of fame, there is a plaque next to an oak tree commemorating when Sir Paul came to Lubbock on October 2, 2014, for a concert. At the concert, Sir Paul made it clear how important Buddy Holly was to the Beatles and the world.

Buddy was buried in the Lubbock Cemetery along with his parents. It’s a short car ride to the cemetery to see Buddy’s final resting place.

It’s not hard to find the Buddy Holly Museum in Lubbock. Just search for Buddy Holly Avenue or Crickets Avenue. There is a big mural nearby which should get your attention as you near the museum and the West Texas Walk of Fame.

We went to Lubbock to see the Buddy Holly Museum. Lubbock felt like a very large college town. A lot of energy ran through the town each evening with plenty of great restaurants and bars. But you might find that they are all packed with college kids.