Luxembourg offers many interesting attractions. Here is our review of several we experienced in the city of Luxembourg while on a tour.

We took a tour of Luxembourg from Brussels we book on Viator. It was very easy. We had a 15-minute walk on Brussels’ cobblestone streets with its beautiful buildings. Once we arrived at the spot, we waited until our group arrived in full. Then we followed our guide with the obligatory flag to our bus.

On the bus, we learned a bit about our host country, Belgium, and then the tour guide prepared us for what we were going to see in Luxembourg. The first stop in Luxembourg was the Place D’Armes. 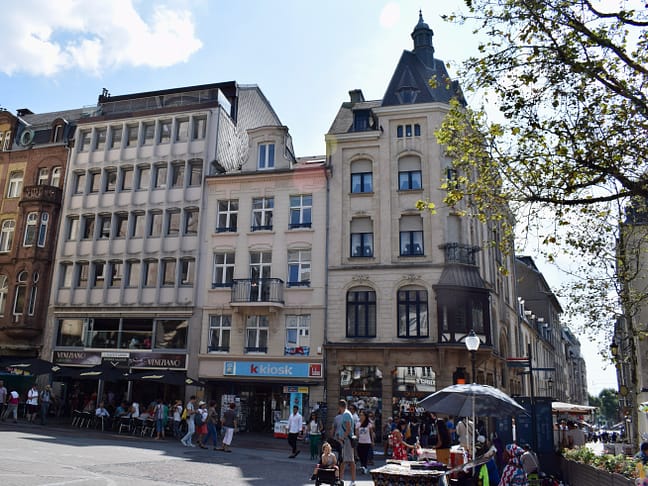 In 1795, during the French period, the Place D’Armes was a military courtyard. It acted as a parade ground for Louis XIV of France. Now it serves as a city square.

In a small building in this square, France, Germany, Belgium, the Netherlands, Luxembourg and Italy signed the Benelux agreement. Benelux is a politico-economic union and formal international intergovernmental cooperation between all six countries. Benelux was named after the three original countries: Belgium, Netherlands and Luxembourg. In 1944, a customs union was introduced between the three countries, and it expanded when other countries signed on. In 1958, the countries signed the treaty establishing the Benelux Economic Union in that building on the square. Benelux was the precursor to the European Union. You’d never know that such a historic agreement was signed in a small, unassuming building in Place D’Armes. 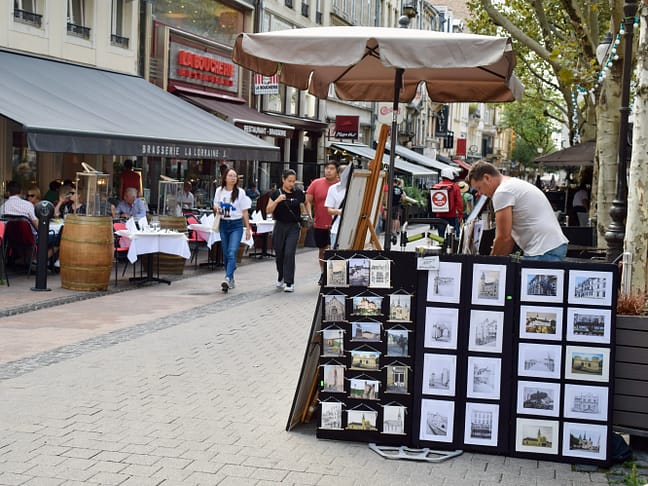 Today, it is known more for souvenir stores and artists selling their works. For the locals and travelers, it is a place to meet someone, have lunch or shop.

We bought a small picture from one of the artists at what we thought was a reasonable price.

The oldest church in Luxembourg is St. Michaels, but the Notre Dame Cathedral might be more visited by travelers. It was originally a Jesuit church, and its design is gothic. Pope Pius IX, in 1870, gave the church its name as the Cathedral of Notre-Dame. It was the Church of Our Lady before that. The church is beautiful both inside and out and still serves as the only cathedral in Luxembourg. It’s worth a visit along with St. Michael’s Church.

In 1613, the foundation stone was laid for what was then known as the Cathedral of the Blessed Lady of the Sablon. It is a remarkable example of late gothic style, but also revealing various components and ornaments inspired by Renaissance style. Downstairs lies a crypt for all of the dukes and duchesses of Luxembourg.

At the end of the 18th century, it adopted the picture of the Lady Comforter of the Afflicted, who had the power to work miracles and is the patron saint of the city and the country. Fifty years later, it was named Saint Mary's Church. In 1870, Pope Pius IX dedicated it as the Cathedral of the Blessed Virgin.

St. Michael’s Church stands in Fishmarket, in the central Ville Haute quarter. It dates from the 10th century. It is the oldest holy building in the city, replacing the castle chapel of the Counts of Luxembourg placed on the same site in 987. Through the centuries, the church was destroyed several times but always reconstructed, altered and expanded.

Today’s St. Michael’s building dates to 1688, although it was restored in the 1960s and 1980s. The church combines elements of Romanesque, Gothic and Baroque architecture. It is dedicated to the archangel Michael, whose statue stands in the front of the church.

As you might guess, the Fishmarket area earned its name from the locals selling fish here. The name was coined in 1692. Fishermen sold their catch here until 1926. It was the center of the city at the time, located at the junction of two roads built by the Romans. It was chosen as the site for the Luxembourg castle.

Today, Fishmarket is merely a street and neighborhood name. The National Museum of History and Art is located here.

The Palais Grand-Ducal is home to the grand ducal family including the duke, duchess and their children. Parliament convenes next door.

Originally the building served as the town hall but was destroyed in 1554 and rebuilt. The parliament was built as an annex in 1859, and the duke and his family has used it as their city residence since 1890.

In 963, Count Siegfried built a fortified castle on the Bock promontory. When walls were added over many years, it became the cradle of the city.

It took centuries to build. Starting on the western side, mighty ring walls were added, which did not foil the Burgundians in their attempt to conquer the city in 1443. The best builder-engineers of the new masters (the Burgundians, Spaniards, French, Austrians and Germans) eventually turned the city into one of the most powerful emplacements in the world, the "Gibraltar of the North." Its defenses were bolstered by three fortified rings with 24 forts, 16 other strong defensive works and a unique 23 kilometers long network of casemates: these could not only shelter thousands of soldiers and their horses, but also housed workshops, kitchens, bakeries and slaughterhouses.

In 1867, after the declaration of neutrality, the military withdrew from the fortress. During the following 16 years, 90 percent of the defenses were demolished. In 1875, the superstructure of the Bock, a tremendous construction, was razed. However, it proved to be impossible to blow up the casemates, without also demolishing part of the city, so the entrances and key connecting galleries were sealed. In spite of this, 17 kilometers (approximately 10 miles) of tunnels remain, often on different levels and tremendous stairways penetrate up to 40 meters (131 feet) inside the rock face.

Beneath the Montée de Clausen, the clifftop site of Count Sigefroi’s once-mighty fort, the Casemates du Bock are an atmospheric honeycomb of rock galleries and passages initially carved by the Spaniards from 1644 onwards. They were extended by French engineer Vauban in the 1680s, and again by the Austrians in the mid-18th century. Over the years the casemates have housed everything from garrisons to bakeries to slaughterhouses. During World War I and World War II, they sheltered 35,000 locals. Kids will adore exploring the passageways.

Jean-Baptiste Nicolas Robert Schuman was a Luxembourg-born French statesman who was instrumental in the founding of the European Union, the Council of Europe and NATO. Schuman was a proponent of European integration. In 1958, he became the first president of the predecessor to the European Parliament. When he left office, parliament bestowed on him the title, Father of Europe. He twice served as the prime minister of France.

In 1946, he consulted with Winston Churchill about a union of European states. He called the vision the United States of Europe. In his speech he said, “We must build a kind of United States of Europe. In this way only will hundreds of millions of toilers be able to regain the simple joys and hopes which make life worth living. The process is simple. All that is needed is the resolve of hundreds of millions of men and women to do right instead of wrong and to gain as their reward blessing instead of cursing.”

Villeroy & Boch factory store was much more interesting to Madeline. But there is a rich history behind the company.

Francois Boch started a pottery company with his sons in 1748. In 1767, the Boch brothers opened a ceramics factory in Luxembourg. One of the first designs to be painted on their porcelain was the brindille pattern. The outstanding quality of the tableware manufactured by the Bochs soon was described as being in the Luxembourg style.

In 1785, Nicholas Villeroy started his own ceramic business specializing in transfer printing of patterns onto earthenware. The Boch family soon followed this process. This method of finely designed and colorful ceramics inspired the name Old Luxembourg style. The two families merged in 1836.

This store is a great place to shop for ceramics, pottery, porcelain and the like. Most of the manufacturing now is done in Germany, so this location serves more as an outlet store.

Le Chemin de la Corniche is frequently called one of Europe’s beautiful balconies. The view extends from the ramparts built by the French and Spanish in the 17th century. From this walkway, we could look out over the old city. When we visited, people wanted to take photos or selfies, so we patiently waited our turn. It’s a photo opportunity and busy. But it’s worth the wait.

Monument to Dicks and Lentz

The Monument to Dicks and Lentz is easy to spot at the Place D’Armes; it’s located on Jan Pallach Square.

It pays homage to two poets of Luxembourg: Dicks and Michael Lentz. I did not recognize either name and wondered why Mr. Dicks didn’t have a first name. Dicks was his pen name. His real name was Edmond de la Fontaine but went by his nom de plume, Dicks, in Luxembourg. Michael Lentz was probably more famous for his composition of the national anthem of Luxembourg.

A lion sits atop the monument to the two poets. The faces of the two poets are on the bottom. Above them stands a statue of a blacksmith representing the steel industry.