While on a tour of Luxembourg, we stopped for lunch at an Italian restaurant for pizza and Belgian beer. Here’s our multinational review!

In a major plaza, our guide declared it to be free time, which also meant lunch time. Madeline and I looked around for souvenirs for a bit, and then decided to have lunch at an Italian place.

Restaurant L’Entracate’s name implies between acts or intermission. The restaurant was small and had seating inside but many more tables outside. The day was warm, so we chose outside. 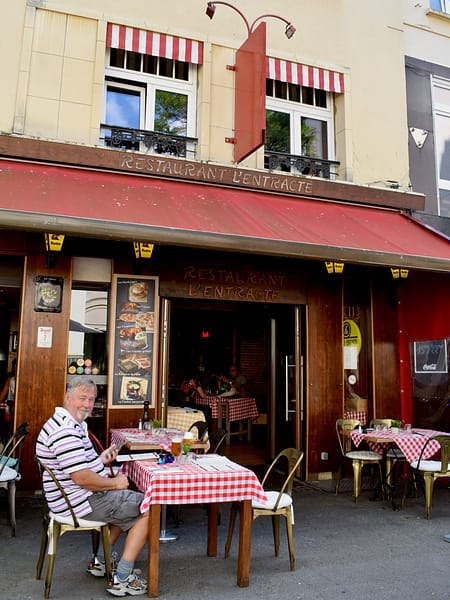 We decided to have a pizza that was large and plenty of food for our mid-day intermission. The restaurant was on a main pedestrian walkway, so we people watched while we dined alfresco. Restaurant L’Entracate was a great restaurant and affordable for lunch. The service was quick and attentive. It was a nice place to spend a little time.

And great Belgian beer is always a welcome treat! You’ll have to ask for a check because they won’t rush you.

There were many places all around the plaza including Subway, McDonald’s and other local fare. Our guide told us during our tour that Luxembourg is famous for beef stew, but the beef usually includes parts of the animal that usually are not sold in American markets. Think intestines and other things. We decided not to order the stew, even if it was exceptional.

This restaurant also had a swiss cheese fondue meal that looked quite appetizing. But it took longer to prepare, so we ordered pizza. It was quite tasty.