After seeing huge wind farms on a recent road trip, I researched wind energy in Texas. Here's what I learned.

Driving through Texas heading into New Mexico, Madeline and I were surprised to see so many wind turbines. Traveling by car increased the chance of seeing wind turbines over our usual method of travel: a plane. You don’t see a lot of ground activity when you are zooming by 35,000 feet in the air.

We were headed to Lubbock on U.S. Route 82. Looking west we saw lots of wind turbines. I wondered how much electricity they actually were producing. The United States has three power grids. There is the Western Grid, the Eastern Grid and the Texas (ERCOT) Grid, with the Eastern Grid being the largest of the three. While all three of these grids are connected, they operate independently. Yep, Texas has its own power grid.

Texas was proud of its power grid. Under Governor Rick Perry, the state spent $6.9 billion on a program that built 3,600 miles of high-voltage transmission lines that crisscross the state. Texas completed its entire network upgrade in a relatively brisk nine years.

But on February 15, 2021, a large winter storm paralyzed Texas. The main culprit was deregulation. Texas electric, wind and gas power plants were not required to spend money to winterize. As a result, some plants shut down due to the weather, and there was not enough electricity to go around. The state’s grid operator, the Electric Reliability Council of Texas (ERCOT) began rolling blackouts across the state.

More than 11 million Texans endured rolling blackouts for up to three days. In the aftermath, the current governor of Texas called for stricter regulations on winterization. The winterization needed to be completed by 2023; there still could be some problems with a Texas winter storm until 2024.

So, if the Texas power grid was a national punchline in 2021, what does this have to do with wind turbines? Texas already had wind turbines but during the 2021 storm, the majority were not winterized. The new winterization legislation changed that.

It was surprising to learn that Texas is the number one renewable energy generator in the country, producing 25 percent of the national total and over 21 percent of all in-state electricity generation. If Texas were a country, it would rank number five in the world in total wind energy generation. 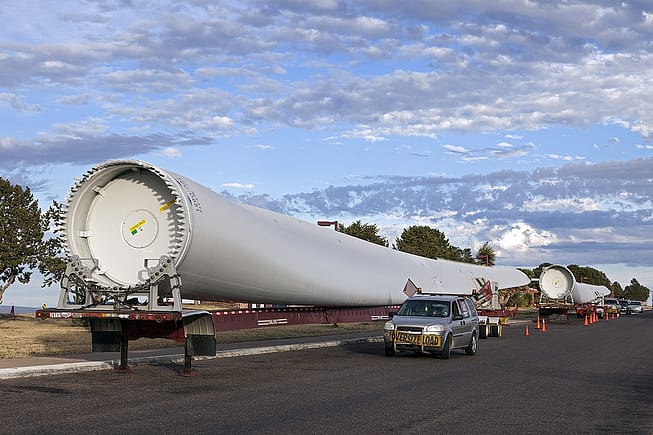 If you drive on the major highways, you might have seen gigantic turbines being transported to wind farms. The wind turbines vary greatly in size. A popular model utilizes a tower that is 256 feet high with blades that are each 143 feet in length. From the ground to the tip of the blade is nearly 400 feet. Newer models can be as tall as 600 feet!

To put that height in perspective, Dallas’ Reunion Tower the famous building with the ball on top. It’s 561 feet tall. Now imagine a wind turbine taller than that!

More than 150 wind farms dot the Texas landscape with more coming. Many are located on land owned by ranchers and farmers who lease their land to a wind developer. This produces an entirely new revenue stream for them.

With all the publicity that California gets with green this and eco that, you might be surprised that California doesn’t even make it into the top 10 wind energy producers in the United States.

To be fair, California produces plenty of renewable solar energy. Renewable energy categories include biomass, geothermal, hydroelectric, solar and wind energy. Together, America produced about 21 percent of all 2020 electricity with renewable energy.

In terms of total electricity produced from renewables, California leads with 97 million megawatt hours (MWh), followed by Texas (91 million MWh) and Washington (74 million MWh). Physical geography explains much of these three states’ strength in renewables. California is the largest producer of geothermal. It has the world’s largest geothermal field. It leads in solar with a huge installation in the Mojave Desert. Texas dominates in wind production. And in Washington, major water features like the Columbia and Snake Rivers provide the basis for the nation’s strongest hydropower sector.

Solar energy production is growing exponentially in Texas. In the first three months of 2022, solar farms generated 85 percent more power than in the same period the year before. In March alone, solar produced more than 1.8 million MWh of electricity in Texas; that’s more than twice the amount it generated in Texas in all of 2016.

Wind energy is still the largest renewable form in Texas for now. Wind and solar combined generated record 34 percent of ERCOT power in Texas in the first quarter of 2022. Total wind power energy production in Texas is expected to double over the next 25 years.

So, the next time you think about Texas oil and gas, think about renewable energy. It’s already here and growing. Y’all need to come to Texas to see more!