We visited New Mexico's Coronado Historic Site for the beauty and history of the ancient Native American settlement. Here's our review. 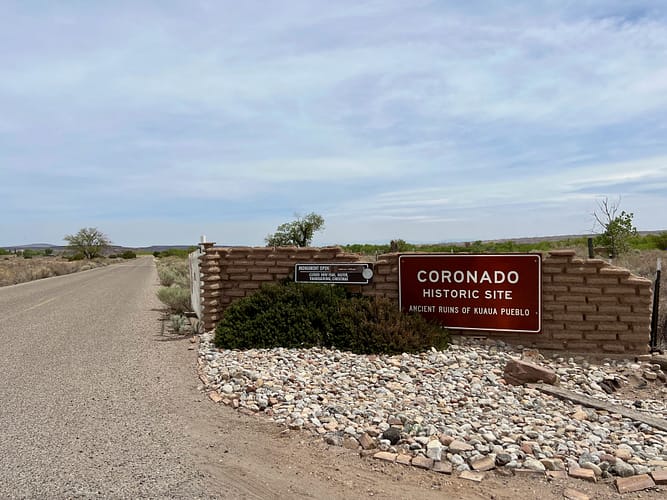 Madeline and I didn’t miss the Coronado Historic Site because it was so close to Albuquerque, where we were staying during a trip to New Mexico. It’s not well advertised, and the sign for it appears only after you make a turn into what appears to be an RV park. The RV park is adjacent to the site, and the signage and gate made it seem we were headed in the right direction. We were! 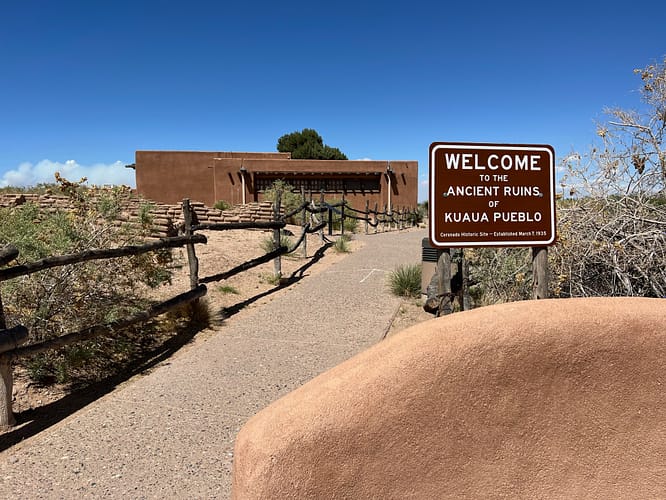 In 1540, Francisco Vásquez de Coronado—with 500 soldiers and 2,000 Indigenous allies from New Spain—entered the Rio Grande valley somewhere near the location of the memorial. Coronado was searching for the fabled Seven Cities of Gold. Instead of treasure, he found a dozen villages inhabited by prosperous native farmers. These newly "discovered" people spoke Tiwa, and their ancestors had been living in this area for thousands of years.

Coronado called them Los Indios de los Pueblos or Pueblo Indians. The native Tiwa knew how to farm and fish during difficult seasons. If it was not for the Tiwa, Coronado and his men likely would have starved to death.

Where the site is located was the Kuaua village. It was the northernmost of twelve villages. Its name means evergreen in Tiwa. It was first settled around A.D. 1325 and was occupied by approximately 1,200 people when Coronado arrived. Conflict with Coronado and later Spanish explorers led to the abandonment of this site within a century of first contact. Today, the descendants of the people of Kuaua live in the surviving Tiwa-speaking villages of Taos, Picuris, Sandia and Isleta.

In the visitor center, we met the park docent who brimmed with information. She told us first to take the outside loop, and then come back inside to view more history where it’d be a little cooler. The walking loop is very easy with great signage. One of the first things we saw was a kiva.

A kiva is a sacred space used for rites and political meetings, many of them associated with the kachina belief system. Kivas are circular and underground and primarily used for spiritual ceremonies. Only men were allowed into the kivas. The signage explained how the ladder was used to enter the underground structure.

The site encourages you to stay on the loop. It’s not a long loop but beware of rattlesnakes. We didn’t see any and stuck to the concrete path just to be safe.

One special feature of this property is that one of the kiva sites has murals inside. The kiva ruins were excavated from 1934 to 1939, and archeologists found murals painted on top of older murals. One kiva had 17 layers of painted murals! It’s amazing to see such beautiful artwork created in the late 15th to early 16th centuries. Be aware that photographs are not allowed in the viewing area.

The Coronado Historic Site offers ramada-covered picnic tables with magnificent views of the Rio Grande River and the Sandia Mountains. After your tour, you can take a look at the river valley. We could see why the Tiwa speakers settled here. It is beautiful. And because they farmed and knew what to plant when and where, they prospered.

You can enjoy the history and beauty of northern New Mexico along with the many other attractions as you travel along El Camino Real de Tierra Adentro National Historic Trail and the Jemez Mountain Trail National Scenic Byway. The Coronado Historic Site packs a lot of history and information into a reasonably small location. If you’re near Albuquerque and are curious about history, it’s definitely worth your time.