New Mexico is the Land of Enchantment. Here are some history and fun facts to get you excited to visit this beautiful and historic state.

Pueblo Indians first settled New Mexico approximately 9200 B.C.E. The Pueblos built cities and sophisticated irrigation systems. Remnants of the Pueblo settlements are all over New Mexico. The Chaco Culture National Historical Park is in northwest New Mexico. There you will find the ruins of an important Pueblo city inhabited between 850 A.D. to 1250 A.D. The Pecos National Historical Park sits near Santa Fe. In 1450, this settlement boasted buildings five stories high that housed more than 2,000 people. 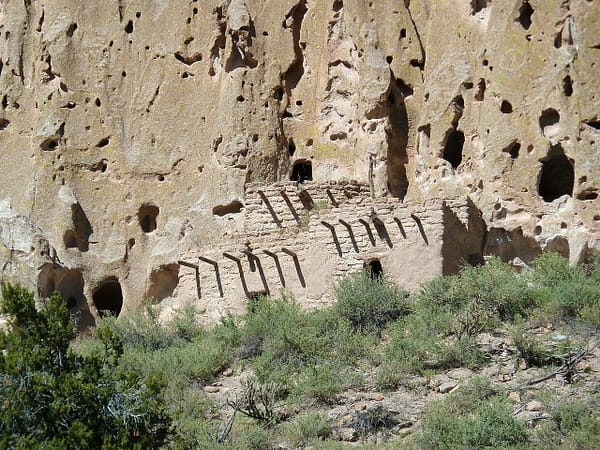 The Bandelier National Monument covers more than 33,000 acres of beautiful canyons and mesas. Here petroglyphs and dwellings have been carved into the soft rock cliffs. Many descendants of the Pueblos live nearby.

Spanish conquistadors exploring the area in the 16th century interrupted the peaceful world of the native Pueblo Indians. The Spanish established Santa Fe in 1607 as their capital of New Mexico. It was the first European settlement west of the Mississippi River.

The Palace of the Governors was built in 1610 and ranks as the oldest continuously used public building in the USA. Nearby lies the San Miguel Mission, which is the oldest church in the country. 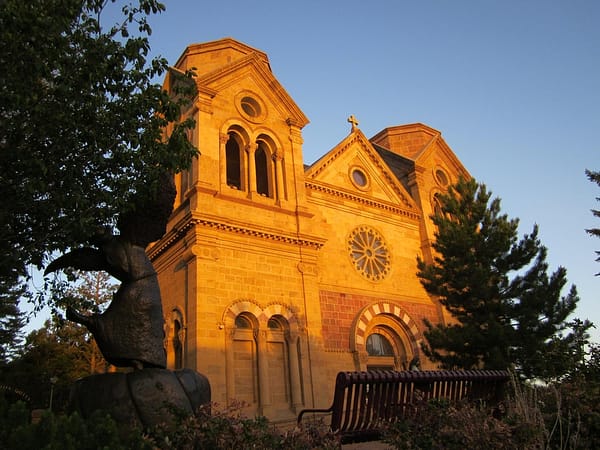 One can find old churches all over Santa Fe. Historians refer to the Spanish occupation as The Golden Age of the Missions. The Spanish sent Franciscan friars into villages to convert the locals. They established missions in large villages, and then dispatched priests to minister to smaller settlements.

Mexico claimed New Mexico in 1821. At the end of the Mexican War in 1848, it was ceded to the United States. The area was governed as the New Mexico Territory until 1912, when it was admitted as a state.

Since 1945, New Mexico has been a leader in energy research and development with extensive experiments conducted at Los Alamos Scientific Laboratory and Sandia Laboratories in nuclear, solar and geothermal areas.

The United States detonated the world's first atomic bomb on July 16, 1945, at the White Sands Testing Range near Alamogordo. The bomb was designed and manufactured in Los Alamos.

The Los Alamos area and Sandia Mountains are beautiful and these days free from atomic or hydrogen bomb testing.

Albuquerque is widely known for the annual Balloon Fiesta. In 2022, the festival will mark 50 years of floating fun. This event attracts people from all over the world. During the event, there will be many days of Mass Ascension, a launch of all the participating balloons. Mass Ascension has been a feature of Balloon Fiesta since its earliest days and is the most spectacular display of sound and color. Balloons launch in two waves with launch directors, also known as zebras because of their black-and-white-striped outfits, serving as traffic cops. On these days, the activities are for early risers with the lead balloon launching at 7 AM, always flying the American flag to the strains of The Star-Spangled Banner.

Taos draws tourists interested in its thriving arts scene. Its name derives from the native Taos language meaning (place of) red willows. Nearby is the Enchanted Circle, an 85-mile U.S. Forest Scenic Byway, which connects Taos with the resort communities of Red River, Eagle Nest and Angel Fire. Taos hosts a ski resort, Taos Ski Valley; a world heritage site, Taos Pueblo; and one of the most photographed churches, St. Francisco de Asis.

New Mexico is known as the Land of Enchantment. I think that is a good name because there are so many fascinating things to see. The Pueblo culture is everywhere. The landscapes, sunrises and sunsets have you looking for your camera. It is the nation’s fifth-largest state in land mass. The majority of the roads are unpaved and take you to all sorts of places to explore. And New Mexico raises more cows than people with over 13,000 ranges that cover over 60 percent of the state. If you are a stargazer, you’ve come to the right place. It’s not hard to venture away from any city and find yourself staring at millions of stars.

Have fun in the Land of Enchantment!