The Jemez Mountain Trail National Scenic Byway is a great way to tour the historic sites and natural beauty of New Mexico. Here's our review.

Madeline and I were interested in driving the Jemez Mountain Trail National Scenic Byway. It was a route to see many of the historic pueblos, national monuments and beautiful scenery. From Albuquerque, we headed north toward Bernalillo. The loop we had in mind was over 270 miles, and we broke it up into two loops.

We were forced into this idea because New Mexico was suffering from wildfires that closed Bandelier, the Valles Caldera and other important stops. The picture above shows what we were planning to do. I threw in Pecos National Historical Park, which adds a noticeable detour, but it was worth it.

We decided to go from Albuquerque to Jemez Historic Site, Soda Dam and  Battleship Rock on one day. Then we went to Coronado Historic Site and Pecos National Historical Park on another day. We want to come back to New Mexico to see Bandelier and more historic places.

This post gives you an overview of what you along the byway.

If you are thinking about visiting a pueblo, you will quickly realize that each one is unique. There are 19 Pueblo tribes in New Mexico. Each pueblo is a sovereign nation. Today, Pueblo citizens are located primarily in New Mexico. But in the past, Pueblo homeland reached into what is now Colorado and Arizona, with incredible dwellings and trading centers at sites such as Chaco Canyon in northwestern New Mexico and Mesa Verde in southwestern Colorado.

The Jemez Historic Site protects the ancient village of Gisewa and the San Jose de los Jemez mission church. This is a small site, and you can easily see it in about 30 minutes. We spent longer because they had very informative exhibits inside the visitor’s center. You can learn about the culture of the people Gisewa and the role the Franciscan mission played in the colonization of New Mexico. It’s one of the best-preserved sites you can see in the American Southwest.

Coronado Historic Site commemorates the Coronado Expedition of 1540 to 1542 and its lasting impacts on the culture of northwest Mexico and the southwestern United States. The park is also located near the center of a biological crossroads, incorporating four distinct ecological zones: Sierra Madre, Chihuahua Desert, Rocky Mountains and Sonoran Desert.

The site offers an interesting walking loop on which you can see how pueblo living was designed. As with other pueblos, there are kivas that are still intact. A kiva is an underground, circular space used for political meetings and rites, many of them associated with the kachina belief system. What is different about this site is that they carefully excavated the murals and painted kivas. They have an exhibit room where you can see them.

Pecos National Historical Park holds 12,000 years of history, including two Spanish colonial missions, Santa Fe Trail sites, the Forked Lightning Ranch and the site of the Civil War Battle of Glorieta Pass. We paid $2.00 to visit the park. You can visit the Pecos (Cicuye) Pueblo and the Spanish mission on your own during park hours. A 1.25-mile self-guided walking loop around the site begins at the visitor center. There is a longer loop as well.

Here you will see remnants of pueblo construction, kivas and a reconstruction of what is called The Second Church. The stone foundations stretch 150 feet from altar to entrance and the walls are 22 feet thick in places. Archaeologists estimate that builders used 300,000 forty-pound adobe bricks to complete it. 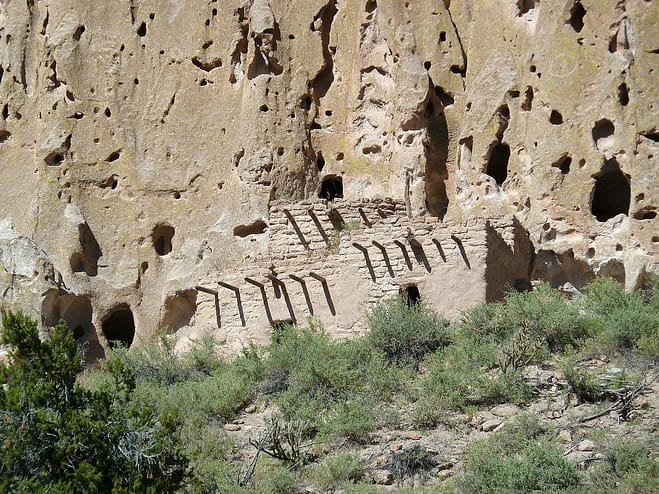 Because of wildfires, we did not get a chance to visit Bandelier National Monument, but we will come back. A unique feature is the Long House. Holes in a cliffside make this house. This method allowed it to be three to four stories tall.

Bandelier National Monument is a 33,677-acre site near Los Alamos, New Mexico. Most of the pueblo structures date between 1150 and 1600. The monument protects ancestral Pueblo archeological sites, a diverse and scenic landscape and the country's largest National Park Service Civilian Conservation Corps National Landmark District. Two-thirds of the park, 23,267 acres, is designated as the Bandelier Wilderness Area. The Park Service does not allow motorized travel or permanent structures in the wilderness area.

President Woodrow Wilson designated Bandelier as a national monument on February 11, 1916, and named for Adolph Bandelier, a Swiss-American anthropologist who researched the cultures of the area and supported preservation of the sites. The park infrastructure was developed in the 1930s by crews of the Civilian Conservation Corps. The National Park Service cooperates with surrounding Pueblo nation, other federal and state agencies to manage the park.

Near the Jemez Historic Site is the Walatowa Visitor Center and History Museum. The museum is free. A large cultural exhibit explains the local Native culture. They played a DVD for us that taught us about the Towa culture and traditions.

Outside the Walatowa Visitor Center, there are a few interesting things to see. Madeline found the Jemez Fieldhouse, which was used as a seasonal home during warm weather. We couldn’t go inside it, but the thick walls probably provided some much-needed insulation from the New Mexico summer heat.

Be sure to stop in!

Soda Dam is located on the east side New Mexico State Route 4, just north of the Village of Jemez Springs. It is a natural dam and hot springs deposit estimated to be 7,000 years old.

The dam is primarily composed of calcium carbonate and travertine. It extends more than 300 feet across the Jemez River Valley. Soda Dam itself is 50 feet high and 50 feet wide at the bottom. Where the river flows through the dam, it creates a unique natural soda bridge over the stream and a scenic waterfall.

The springs were used by local indigenous people before the arrival of settlers. Artifacts and archaeological finds have been discovered at Jemez Cave near Soda Dam that indicate people were in the area as early as 2,500 B.C.

Battleship Rock is a spectacular basalt rock cliff at the confluence of the Jemez River and the East Fork of the Jemez River. The formation is located in north-central New Mexico in the Jemez Mountains. I didn’t think I would be impressed but I was wrong. It looks like the bow of a warship. Battleship Rock stands over 200 feet high. There is a picnic area, camping and hiking nearby. Volcanic ash formed the rock more than five million years ago.

The Big Chief gas station is now closed. If you are a Breaking Bad fan, you’ll recognize the station. In the episode, “Green Light,” Jesse filled up at this gas station. Unfortunately for Jesse, he had no cash. He charmed Cara for both gas and cigarettes and paid her with methamphetamines.

Be careful taking pictures. Madeline found a narrative online from a woman who thought the sign was very interesting and worthy of a picture. She parked at the pump when the proprietor came out of the gas station telling her that she couldn’t take pictures because the gas station was on Zia Reservation land. Respect the reservation’s land and people and take your picture from the highway like Madeline did!

When we passed the Zia Pueblo, we knew it was not a tourist location. However, we saw the sign and recognized it as quite similar to the sun logo inside the New Mexico state flag.

In 1925, New Mexico, which gained statehood in the United States in 1912, adopted a design for its flag featuring a sun symbol belonging to the Zia Nation. According to the tribe, the symbol was secret and stolen from the Zia, who lost both ownership and control over it.

The pueblo is located northwest from Bernalillo US 550. A nearby billboard welcomes you to the sovereign nation. The billboard states: “Pueblo of Zia–Home of the Zia Sun Symbol.” The circle with sets of four rays is not only on the state flag. It’s on license plates, the state quarter, T-shirts, coffee mugs, bumper stickers, magnets and yard art.

The symbol was part of Zia history. A sacred water jar with the symbol was stolen from the pueblo in the late 1800s. There has never been any monetary compensation to the Zia Nation. Zia today counts 925 members but once numbered more than 15,000.

The Zia Nation asked the state for compensation. The New Mexico legislature didn’t award the Zia any money, though a 2012 memorial later acknowledged the state had appropriated the image without permission, including on the state’s flag beginning in 1925.

The Zia people have asked artisans and trade people to recognize the symbol as something belonging to the nation. Responsible artists have requested permission to use the symbol. If granted, they voluntarily have given a portion of their profits back to the people. Maybe this will be the trend going forward.

It is an interesting story about the Zia Nation and a little background on the sun symbol everybody has seen but few understand.

We think you’ll enjoy this road trip. We broke it into into smaller arcs so we could spend more time in each area. Decide what works best for you. But whatever you choose, you’ll enjoy the history and the view.