We had a close encounter of the Roswell kind. Roswell's UFO Museum is a fun and informative stop to learn about the [in]famous town.

What’s the first thing you think of when someone mentions Roswell, New Mexico? Is it Felix Baumgartner? Probably not. But he did represent Roswell when he departed from Roswell Airport in a balloon that took him into the stratosphere. He livestreamed the whole thing. And when he reached 128,000 feet, he jumped. He set records for the fastest free fall speed, reaching 834 miles per hour. He also set the record for the highest manned balloon flight. 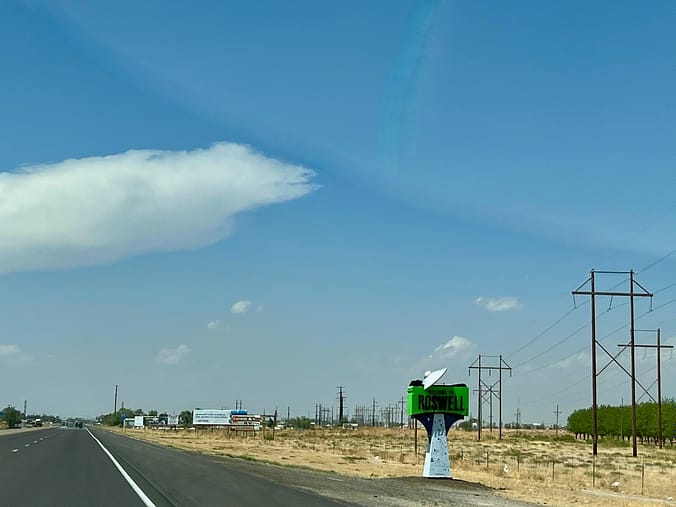 Okay, maybe Felix isn’t why you remember Roswell. It’s probably the UFO incident. It all started in 1947 when Mack Brazel, the foreman of a ranch 75 miles north of Roswell, was checking his sheep after a violent thunderstorm the night before. He found a large area of debris spread across the prairie. He collected some metal, foil and wood artifacts and decided to report it to the authorities.

Mr. Brazel drove to Roswell on July 6 and told Sheriff George Wilcox about his find. Wilcox called the Roswell Army Airfield. The sheriff wondered if an airplane had crashed. The military went to the site and gathered more information. On July 8, a press release stated that a flying saucer had been found. The next day, another press release, now from a general, said it was a weather balloon. This began the conspiracy theory that has been talked about for generations. 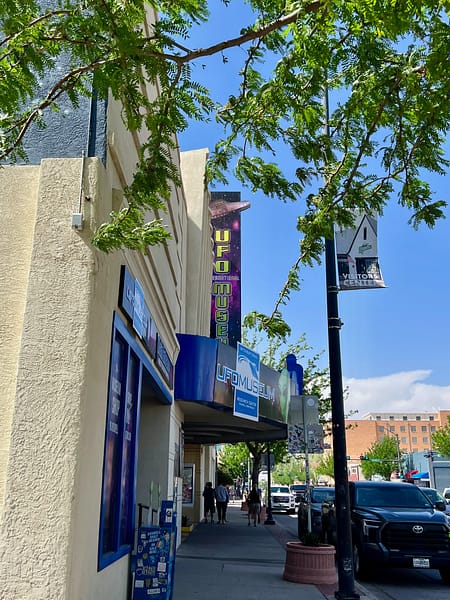 The International UFO Museum and Research Center is a non-profit 501(c)(3) corporation. They charge admission to the exhibits.

The museum displays go into great detail about the 1947 Roswell incident, but they also show plenty of information related to other unexplained phenomena.

We’ve all seen aliens on TV shows and in the movies. It’s a little different when you see them as life-size figures. Somewhat fitting, the UFO Museum uses a converted movie theater as its venue.

The museum offers dioramas along with interactive exhibits. Adults and young children can enjoy the visit. Nothing is particularly scary for young ones, but parents might have to explain why the aliens don’t really look like normal people.

Madeline and I had an “oh my” moment when we found an exhibit that talked about a flying object seen in Stephenville, Texas, on January 8, 2008. My grandparents lived in Stephenville. My grandmother lived to be 100 years old and told stories of her childhood. She witnessed quite a few inventions along the way, including electricity, airplane travel, indoor plumbing and the like. She passed away before 2008; I wonder what she would have thought about aliens in her hometown!

We saw the Stephenville story in an area that talked about close encounters. You probably remember the Stephen Spielberg film: Close Encounters of the Third Kind. A quick refresher might be in order to explain the types of close encounters, particularly if you are curious about UFOs which seem to be getting a lot more attention lately. On Tuesday, May 17, 2022, a House Intelligence subcommittee held the first congressional hearing on UFOs in 50 years. "There are a lot of unexplained aerial phenomena. We don't know what they are, and they can't be easily rationalized as weather phenomenon or balloons or anything else. So, it's quite a mystery," said House Intelligence Committee Chairman Adam Schiff.

So, what are these kinds of close encounters exactly? A close encounter of the first kind means something has been seen in the sky and it can’t be explained. There is no evidence left behind. You’ve probably seen the news stories of Air Force or commercial pilots who see objects in the sky and can’t identify them.

The second kind of close encounter occurs when the UFO leaves some physical trace. This includes debris, burn marks on the ground or other evidence.

Who made up this classification system? Alan Hynek was an astronomer at Ohio State University. He was an advisor to the Air Force. Stephen Spielberg paid Hynek a thousand dollars to borrow the third encounter phrase for his movie title. Hynek was not a conspiracy theorist. He simply felt that there should be a classification system to make any UFO a legitimate scientific pursuit.

Mr. Hynek stopped at three types of close encounters. Others have added to his work by classifying a fourth and fifth type of encounter. A close encounter of fourth kind is a UFO event in which a human is abducted by a UFO or its occupants.

A close encounter of the fifth kind is a UFO event claiming direct communication between aliens and humans.

If you are curious about UFOs, or maybe just want to know more about the famous 1947 Roswell incident, the UFO Museum is the place to go.

And like any museum, they have a gift shop!

New Mexico has plenty of attractions to draw tourists. We came to New Mexico to learn more about the pueblo culture and to visit Carlsbad Caverns. But our stop in alien country was a fun side trip.

Remember, “the truth is out there,” especially if you are a fan of the X-Files.