There are plenty of places for cafés all over Tokyo. The Japanese take their coffee and tea very seriously.

Below are a few cafés I like, including one Starbucks. Enjoy your coffee break!

Also check out our other Tokyo posts.

Azabu Coffee is a cute coffee shop on the main shopping street in Azabujuban near where we lived. I wanted some coffee, so one day we checked it out. We looked at the menu, and it had what I wanted. The shop is small, and they only had a few spots to sit down. Depending on the time of day, you might want to get your drink to go.

There’s a Starbucks across the street, but Azabu Coffee has pancakes and pastries that looked tastier than the big chain. Besides, you can go to Starbucks anywhere in the world. If you want to try something local, give Azabu Coffee a try. This place is quaint and authentic.

Yes, Starbucks is the big coffee chain. But the Starbuck’s at Shibuya Crossing is the go-to place for people watching. Get your beverage on the first floor, and then head to the second floor. Most people are at the windows talking about all the people at Shibuya Crossing. They’ll be taking pictures and enjoying the cityscape. There are other viewing spots for Shibuya Crossing, but this is the most popular.

The best vantage point to check out Shibuya Crossing

Everyone wants a window seat, so that area gets crowded. Expect a line. But everyone is friendly. If you can’t get a window seat, you still can take a few photos and find a seat elsewhere. Or head to Shibuya Crossing and experience being in it!

The name Glitch comes from the owner’s idea that good things can come from mistakes. The owner, Kiyokazu Suzuki, thinks people can learn from their failures and discover amazing things in their errors. He opened his doors originally to other café owners who wanted to roast coffee in his on roaster or buy crops of beans together. Some of the roasting mistakes turned into a success story down the road.

Suzuki-san’s opened his shop in fashionably vintage Jinbocho, which is near a university and has plenty of secondhand bookstores. It’s close to Yasukuni Shrine, a popular tourist attraction. Suzuki-san spent a decade as chief barista and head roaster at another coffee house before opening his own shop in 2015.

Suzuki-san selects single-origin beans and does all the roasting in house. He brews his coffee using a Kinto pour-over technique. Unlike some coffee-only places in Tokyo, at Glitch you can get croissants and pastries along with your coffee.

This is a fussy coffee shop without the fussy behavior. That’s to say the staff sweats the details but don’t act snobby about it. Glitch is talented people who know their coffee making your day special with a cup of coffee.

The first thing I noticed about Café de l'Ambre was the coffee only sign outside. The place has been in business since 1948, and it’s run by the same owner, Ichiro Sekiguchi. People in Ginza need their caffeine to keep shopping. Café de l'Ambre makes serious coffee for serious shoppers. 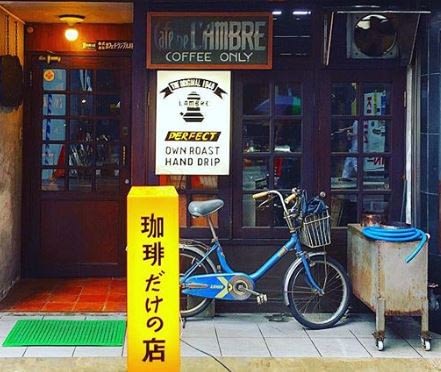 Inside it looks like the place hasn’t been updated for 40 years. But this gives it a warm, inviting atmosphere. They have aged coffees, single-origin beans and blended beans. If you like coffee, give Café de l'Ambre a try.